Flickr/See-ming Lee
An activist waves a rainbow flag, an international symbol for the rights of gay, lesbian, bisexual and transgender people.

16 November 2012
The United Nations human rights office today expressed its concern over reports of people in Cameroon being harassed, intimidated, arrested and imprisoned because they were suspected of being lesbian or gay – and called for an end to such practices.

Article 347 of the current penal code in the country criminalizes ‘sexual relations with a person of the same sex’ and provides for a penalty of up to five years imprisonment and a fine, according to the Office of the UN High Commissioner for Human Rights (OHCHR).

Addressing a news conference in Geneva today, an OHCHR spokesperson, Rupert Colville, said that the law breaches Cameroon’s international human rights commitments and violates rights to privacy and to freedom from discrimination.

“While the penal code relates specifically to sexual conduct, we are seriously concerned that it is being applied in a broad-brush way to prosecute many individuals on the basis of their appearance, their mannerisms, style of speech or general conduct,” Mr. Colville said.

He noted that OHCHR calls for an end to the arbitrary arrest and detention of all persons suspected of homosexual behaviour, as well as access to justice for those already detained.

In 2011, according to OHCHR, Roger Jean-Claude Mbédé was convicted of suspected homosexual conduct after the authorities discovered he sent a text message to another man that read ‘I am very much in love with you.’

In addition, Jonas Singa Kumie and Franky Djome were convicted last month on the basis of their appearance, which was perceived as effeminate, and the fact that they had been seen drinking Bailey's Irish Cream. All three have an appeal hearing next week.

“It is especially worrying to receive reports of anonymous threats being made against human rights defenders working to protect the rights of lesbian, gay, bisexual and transgender (LGBT) persons,” Mr. Colville said, citing the case of a prominent Cameroonian lawyer, Alice Nkom, who has received multiple threats to her life and the well-being of her family because of her work speaking out for LGBT people.

“The Government of Cameroon has a duty to end these abuses. It should provide adequate protection to human rights defenders working to protect the rights of LGBT persons,” Mr. Colville said.

He added that Cameroon should also use the ongoing review of its penal code to amend article 347 of the current penal code so that it complies with the country’s international treaty obligations, including the International Covenant on Civil and Political Rights.

At the moment, according to the UN human rights office, the draft of the revised code would go in the opposite direction: it would strengthen penalties for same-sex relations and conflate homosexuality with non-consensual sexual practices and paedophilia. 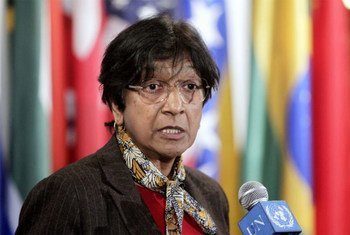 4 October 2012
The United Nations human rights chief today urged Serbia to allow a pride parade for the lesbian, gay, bisexual and transgender (LGBT) community to take place after authorities banned the public gathering, stressing that citizens should not be prevented from exercising their fundamental freedoms of expression, association and peaceful assembly.