6 November 2012
While citing the rapid development and growth of the Internet, a top United Nations official today urged greater efforts to bridge the ongoing digital divide and ensure that everyone around the world can harness its benefits.

There were 2.3 billion Internet users worldwide at the end of 2011, the UN Under-Secretary-General for Economic and Social Affairs, Wu Hongbo, said in his address to the Internet Governance Forum (IGF), which opened in Baku, Azerbaijan. In addition, mobile broadband reached more than 1 billion subscriptions, while the use of fixed broadband was estimated at 590 million subscriptions.

“While this progress is surely significant, we have a long way to go in our collective efforts to bridge the digital divide,” he told participants, noting that only a quarter of inhabitants in the developing world were online by the end of 2011.

“This low number of Internet users in developing countries calls for increased efforts in shaping and implementing appropriate policies to assist everyone to harness the benefits of the Internet, and advance sustainable development,” stated Mr. Wu.

“This is a task for all of us,” he added. “The Internet Governance Forum is an important venue for raising awareness, initiating discussions, identifying ways to address the digital divide, and informing the policy-making processes.”

The IGF was convened by the UN Secretary-General in 2006, as a multi-stakeholder forum for policy dialogue related to Internet governance issues. It includes the participation of governments, intergovernmental organizations, business representatives, the technical community, civil society organizations, as well as any individual Internet user interested in Internet governance issues.

“Clearly, the Internet is an important tool for development,” Mr. Wu stated. “It is utilized in multiple sectors, including health, education, agriculture and industry, disaster relief, and environmental protection, among so many others.”

He noted that worldwide communication is now faster and easier than ever. Telemedicine and e-learning are available to people in remote areas, and mobile technologies are empowering millions of women in developing countries, creating entrepreneurial opportunities. The use of information and communication technologies (ICTs) in providing vital government services is also on the rise.

“The current ITRs set the stage for the mobile revolution and the information society – and we are confident that the 2012 ITRs will help usher in the knowledge society,” the Secretary-General of the UN International Telecommunication Union (ITU), Hamadoun Touré, told participants at the Forum. “Simply put, WCIT-12 is about putting ICTs in the hands of all the world’s people.”

Concerning WCIT and the Internet, Mr. Touré described as “ridiculous” misleading stories about the ITU or the UN ‘taking over the Internet.’

“ITU continues to play its role in the realm of the Internet, as we have done since the Internet’s inception – for example through ITU-brokered and ITU-approved global standards for the critical transport layers of the Internet and Internet access technologies,” he said. “But this does not mean that ITU wants to ‘take over the Internet’ or ‘control the Internet’ – indeed, I don’t even know what that might or would really mean, in practical terms.” 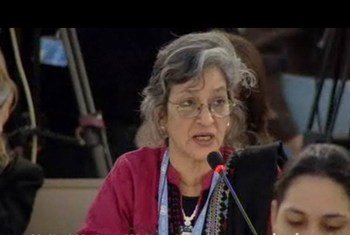 18 May 2012
As a powerful global information resource, the Internet must be accessible to everyone and measures to ensure this must be taken, a United Nations independent expert said today.