The panel tasked with advising on the global development agenda beyond 2015, the target date for achieving the anti-poverty targets known as the Millennium Development Goals (MDGs), today reaffirmed its commitment to work together on a framework to combat poverty.

“We had a lively, constructive and very productive set of discussions,” said Prime Minister David Cameron of the United Kingdom, one of the three co-chairs of the High-level Panel of Eminent Persons on the Post-2015 Development Agenda after the panel’s second meeting in London.

According to a news release, discussion among the Panel members covered human development, jobs and livelihoods, and how to reach the marginalized and excluded. The three-day meeting also allowed Panel members to gather input from international civil society, private sector representatives and global youth, answering Secretary-General Ban Ki-moon’s call for transparency and inclusiveness in its consultations.

The High-level Panel is part of Secretary-General Ban’s post-2015 initiative, mandated by the 2010 MDG Summit, at which UN Member States took stock of the progress made in achieving the MDGs. Member States have called for open, inclusive consultations – involving civil society, the private sector, academia and research institutions from all regions, in addition to the UN system – to advance the development agenda beyond 2015.

President Susilo Bambang Yudhoyono of Indonesia, who is also a co-chair along with Liberian President Ellen Johnson Sirleaf, stressed that development will need to involve a sustainability perspective if it is to maintain economic growth without damaging the environment.

“Through sustainability, we want to guarantee that economic growth does not jeopardise the environment. We must ensure that the present generation meets their needs without compromising the ability of the future generations to meet their own needs,” he said.

Members of the Panel will continue discussion among themselves and with various stakeholders over the next eight months. The next meeting of the panel will be held in the first quarter of 2013 in Monrovia, Liberia.

“Today’s meeting was very, very participatory, very rich, bringing together the diverse groups of panel members that have served and achieved so much in their areas. And so we are looking forward to the next few months,” President Sirleaf said. 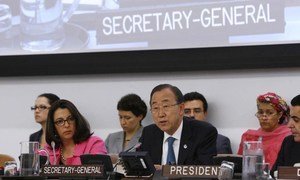