25 October 2012
Countries gripped by a hunger crisis in West Africa’s Sahel region urgently need additional help to combat a series of intestinal-worm and other Neglected Tropical Diseases (NTDs) that have spread in the wake of regional flooding, the United Nations health agency said today.

According to the UN World Health Organization (WHO), simple de-worming interventions will ensure that people can fully benefit from the food aid distributed.

NTDs are a group of poverty-associated chronic infectious diseases – such as bilharzia, roundworms, hookworms and whipworms – that are endemic in poor and rural populations in the developing countries of Africa, America and Asia, according to WHO.

The diseases affect over 1.4 billion people worldwide, and cause severe morbidity and mortality, and are transmitted by insect bites, flies, water contact or worms in the soil, and are easily spread in areas of poor sanitation.

Dr. Gomes said the flooding created the “ideal breeding ground” for contracting NTDs and worm-like diseases in the Sahel region, which spans Senegal, Mauritania, Mali, Burkina Faso and Niger, amongst other countries. As a consequence, they are now “more at risk of malnutrition,” he added.

The Sahel region has been gripped by prolonged drought and internal conflict, with nearly 19 million people currently food insecure, including more than one million severely malnourished children under the age five years.

The agency said the number of food insecure people in the region is likely to increase because of the rise in the number of NTD cases, with NTD cases also on the rise because of low quality drinking water and inadequate latrine coverage that coincide with the Sahel flooding.

“The full impact of the Sahel crisis will only be felt in the months ahead on people’s livelihoods,” the health agency noted in the news release. “Integrating de-worming activities is… feasible and cost-effective – costing less than 50 cents to treat a person for a year.”

It added the low cost was “especially important” because only half of $1.6 billion of an appeal for Burkina Faso, Mali, Chad, Mauritania and Niger have been received.

Cholera outbreaks in several countries of the Sahel have exacerbated the situation, and the problem is extending to Central African countries, such as Chad and Cameroon, WHO noted. 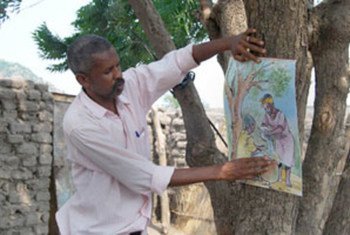 28 August 2012
The United Nations health agency is reporting a continuing decline in the number of guinea worm cases – one of two diseases, along with polio, that it says is slated for eradication.