That was a key message of the United Nations Deputy Secretary-General, Jan Eliasson, in his remarks today to an African Union (AU), Economic Community of West African States (ECOWAS) and UN Meeting of the Support and Follow-up Group on Mali, held in Bamako, in the West African country’s capital.

“Any military action must also support a coherent political strategy for the country’s reunification. And for the international community to back an international military force, human rights and humanitarian law must be scrupulously respected,” Mr. Eliasson said.

“The aim of the political process should be to build a broad-based national vision for the future of Mali. This will require a roadmap for the Transition so that preparations for elections can begin,” he added.

Addressing reporters at UN Headquarters last week after a visit to parts of Mali, a senior UN official, the Assistant Secretary-General for Human Rights, Ivan Šimonovic, cited, among a litany of human rights abuses committed by the Islamists, “very drastic punishments,” the recruitment of child soldiers, and enforced marriages that are a smokescreen for enforced prostitution.

The instability and insecurity resulting from the renewed clashes, as well as the proliferation of armed groups in the region, drought and political instability in the wake of a military coup d’état in March, have led over 250,000 Malians to flee to neighbouring countries, with 174,000 Malians estimated to be internally displaced.

In his speech in Bamako, the Deputy Secretary-General said that any political process in Mali should enable its Transitional Authorities to engage in talks with the rebel groups in the north, which represent the legitimate grievances of communities which have suffered from years of marginalization and neglect.

“It is imperative that these groups cut off all ties to terrorist organizations, as called for in Security Council resolution 2071,” Mr. Eliasson said, adding that “the military forces are to refrain from interfering in the political arena.”

The Council unanimously adopted resolution 2071 last Friday, citing the threat to regional peace from terrorists and Islamic militants in rebel-held northern Mali. In it, it held out the possibility of endorsing, within 45 days, an international military force to restore the unity of the West African nation.

The 15-member body called on Secretary-General Ban Ki-moon to support the Malian political process and provide, at once, military and security planners to ECOWAS, the AU and other partners, to help frame a response to a request by Mali’s Transitional Authorities for such a force, and to report back within 45 days.

“The important work already done by the Malian authorities, ECOWAS and the AU will serve as a solid basis for our joint efforts,” Mr. Eliasson said, adding that the world body is ready to provide immediate support to a national dialogue and assistance to strengthen national capacities for political negotiations.

“We are also in the process of deploying military planners and security sector reform advisers to Bamako,” he noted.

The Deputy Secretary-General added that the Malian defence and security forces must be at the forefront of internationals effort to combat terrorism and crime in the country’s north.

“A critical first step in this direction will be to support the re-organization of the defence and security forces, as requested by the Malian authorities,” he said, noting that, as called for by the Security Council, comprehensive reform of the security sector must also be at the core of the international community’s collective efforts to consolidate Malian state institutions.

In his remarks, the deputy UN chief also noted the presence at the meeting, and the role of the recently-appointed Special Envoy of the Secretary-General for the Sahel, a former Italian Prime Minister, Romano Prodi.

“The Special Envoy will be working closely with all of you to mobilize international financial support, coordinate the United Nations integrated regional strategy for the Sahel, and help bring about a comprehensive solution to the crisis in Mali,” Mr. Eliasson said.

The Sahel region, which stretches from the Atlantic Ocean to the Red Sea, and includes Chad, Mali, Mauritania, Niger, and parts of Sudan, Cameroon and Nigeria, is currently facing a swathe of problems, which are not only political but also involve security, humanitarian resilience and human rights. 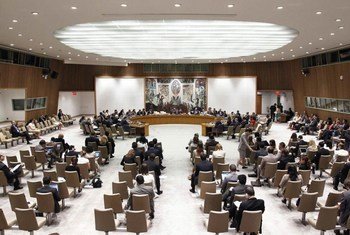 12 October 2012
Citing the threat to regional peace from terrorists and Islamic militants in rebel-held northern Mali, the United Nations Security Council today held out the possibility of endorsing, within the next 45 days, an international military force to restore the unity of the West African country.