It is vital to find alternative paths to teach basic skills for employment in developing countries, where 200 million people aged 15 to 24 have not even completed primary school, and the need to increase funding to fill this deficit is dire, according to a United Nations report released today.

“We are witnessing a young generation frustrated by the chronic mismatch between skills and work,” UN Educational, Scientific and Cultural Organization (UNESCO) Director-General Irina Bokova said on releasing the 10th Education for All Global Monitoring Report in Paris.

“The best answer to the economic downturn and youth unemployment is to ensure that young people acquire the basic skills and relevant training they need to enter the world of work with confidence. Many, and young women in particular, need to be offered alternative pathways for an education, so that they can gain the skills needed to earn a living, live in dignity and contribute to their communities and societies.”

According to the report, entitled Putting Education to Work, the world’s youth population is larger than ever before, one in eight young people are unemployed, and over a quarter are trapped in jobs that keep them on or below the poverty line. As the effects of the economic crisis continue to squeeze societies worldwide, the severe lack of youth skills is more damaging than ever.

There is a dire need to increase funding to fix this skills deficit, the report stresses, calculating that, in addition to the $16 billion needed annually to attain universal primary education by 2015, universal lower secondary school enrolment would cost $8 billion. Programmes offering alternative pathways for skills training also need to be dramatically scaled up to reach young people who have missed out.

“There are worrying signs that aid to education may be slowing down just when children and young people need it the most,” the report’s director, Pauline Rose, said. “Governments and donors must find the money and energy to help young people most in need to acquire the skills they and their countries’ economies desperately need. The private sector is the first to benefit from a skilled workforce and must also step up its financial support.”

Reallocating aid could help fill the funding gap, the report noted. Some $3.1 billion of aid to post-secondary education never reaches the educational systems of developing countries as it is used to fund foreign students in donor countries. These funds could be better spent tackling the skills deficit for disadvantaged youth in poor countries. The cost of one Nepalese student’s scholarship in a developed country could give 229 students access to secondary education at home.

The report stressed that investing in young peoples’ skills is a smart move for countries seeking to boost their economic growth, estimating that every $1 spent on a person’s education yields $10-$15 in economic growth over that person’s working lifetime. Not investing in young people’s skills leaves them either adding to unemployment statistics in rich countries, or trapped in jobs earning poverty line wages in low-income countries.

There are long-term effects of ignoring youth skills in countries the world over. Drawing on data from the Organisation for Economic Cooperation and Development (OECD), a group of 34 developed countries committed to democracy and the free market, the report estimates that 160 million adults in developed nations do not have the skills needed to apply for a job or read a newspaper.

Overall, poor young populations, urban and rural, are the most in need of skills training. In urban areas, the youth population is larger than it has ever been and growing. In a fifth of countries analysed, poor, urban young people have less education than in rural areas. Over a quarter earn little more than $1.25 a day.

The vast majority of the world’s poor and least educated live in rural areas, however. Many young farmers facing land scarcity and the effects of climate change, lack even basic skills needed to protect themselves and make ends meet. Women are the most in need. They need training in business and marketing to find opportunities beyond farm work and reduce the obligation of migrating to cities in search of a job, the report notes. 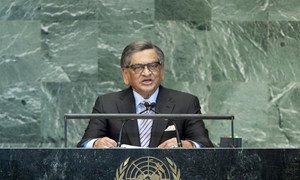 Describing terrorism as one of the most “potent threats” to international peace, India’s Minister of External Affairs, S. M. Krishna, used his address before the United Nations General Assembly today to call for universal rejection of acts of terror and piracy.