Lamenting the slow progress in implementing an agreement between the Sudanese Government and one of the rebel groups in the country’s Darfur region, the acting head of the joint United Nations-African Union peacekeeping mission in the region today urged greater efforts by both sides to advance peace and security.

“History has shown us time and again that bold concessions are often a tool of change for the better,” said Aïchatou Mindaoudou, Acting Joint Special Representative of the AU-UN Mission in Darfur (UNAMID) and Joint Chief Mediator ad interim.

Addressing the second meeting of the Joint Commission in the Sudanese capital, Khartoum, Ms. Mindaoudou urged the Government and the Liberation and Justice Movement (LJM) to demonstrate “commitment and flexibility” in efforts to advance progress on the various elements of the Doha Document for Peace in Darfur (DDPD).

Signed by the Government and the LJM in 2011, the DDPD forms the basis for a permanent ceasefire and comprehensive peace agreement to end the fighting that began in Darfur nine years ago, pitting Government forces and allied militiamen against rebel groups.

The Joint Commission, which held its inaugural meeting in last December, is one of two ceasefire monitoring and implementation mechanisms provided for in the DDPD. It is tasked with resolving disputes referred to it by the Ceasefire Commission, the other mechanism under the agreement.

In her remarks, Ms. Mindaoudou noted that efforts by the parties to implement the provisions of the agreement have been confronted by a number of challenges. “Today, we have to note that the process has been very slow and, in the case of the work of the Ceasefire Commission, can even be described as stagnant,” she stated.

One example is the fact that the outcome of the verification of LJM forces and strength, held in early March of this year, remains inconclusive.

“UNAMID undertook a number of initiatives aimed at coordinating the parties’ efforts to resolve the deadlock and move forward to the most critical aspects of the implementation of the security arrangements provisions, but a solution is yet to be found,” said the envoy.

Therefore, she pointed out, no progress has been made towards the implementation of the provisions related to non-military logistical support to the movements; limited arms control; the disarmament, demobilization and reintegration of former combatants into the Sudanese Armed Forces (SAF) and Police Forces, or their social and economic reintegration into civilian society.

The parties have also not been able to establish the Joint Coordination Mechanism (JCM) designed to promote confidence-building between LJM combatants and the SAF, and to contribute in maintaining security in Darfur.

In addition, steps have not yet been taken by the Sudanese Government to recruit male and female volunteers from the local communities, internally displaced persons (IDP) and returning refugees into community police bodies, to participate in maintaining the security and safety of the IDP camps and voluntary return areas.

“No progress is recorded against all these benchmarks because they are directly or indirectly contingent upon a conclusive outcome of the verification exercise,” Ms. Mindaoudou stated.

“It is evident that the impasse in the verification exercise will significantly impede the establishment of a secure environment, a prerequisite not just for the voluntary and dignified return of IDPs and refugees but also for the effective and evenly spread implementation of reconstruction and development projects,” she added. 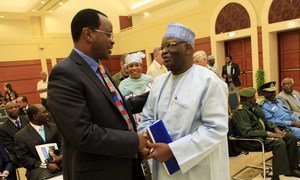 A commission central to the implementation of a peace agreement between the Sudanese Government and one of the rebel movements in Darfur has held its inaugural meeting, chaired by the head of the joint UN-African Union (AU) peacekeeping mission, Ibrahim Gambari.