15 October 2012
While the brutal conflict in Syria continues to dominate headlines, the world cannot afford to be complacent to the ongoing deadlock in the Israeli-Palestinian peace process, a top United Nations official said today, stressing the urgent need to focus on the goal of a two-State solution.

“While the world’s gaze of concern points elsewhere in the Middle East, the Israeli-Palestinian conflict drifts dangerously in a direction that must be avoided,” the Under-Secretary-General for Political Affairs, Jeffrey Feltman, told the Security Council, during a meeting on the situation in the Middle East.

“Both sides maintain their rhetorical commitment to a negotiated peace. However, the creeping realities on the ground and the stalemated diplomacy portray a more worrying reality. Stated intentions to adhere to a two-State solution are not translating into meaningful steps to renewed dialogue on the core issues to be resolved,” he said, noting that the window of opportunity for taking action to preserve the two-State solution may now become more limited.

The parties “cannot be impervious to the warning signs of a fading two-State solution,” he added. “Nor can this Council.”

Violence and other sources of tension on the ground are making it all the more difficult to overcome the political stalemate, Mr. Feltman stated, noting concern about security in the West Bank, settler violence, continued settlement activity, Palestinian attacks against Israelis, as well as sporadic eruptions of violence in the Gaza Strip.

A serious escalation occurred, he said, on 7 October, when an Israeli air strike killed an alleged militant and seriously injured another, as well as eight civilians in Gaza. Some 50 rockets and mortars were fired from Gaza into Israel the following day.

“We must all work to ensure that calm is realized, the closure regime is lifted and the Palestinian divide ends,” the UN political chief said. “Regrettably, there is no new progress to report in ending that divide.”

Meanwhile, the conflict in Syria, now entering its 20th month has reached “new and appalling heights of brutality and violence,” said Mr. Feltman, adding that, available estimates, which the UN is not in a position to verify, put the number of people killed at over 30,000.

“Syrian cities and villages – some of which are part of our world’s heritage – are turning into ruins; archaeological treasures have been looted and destroyed. Such violence is creating a fertile ground for terrorism and criminal actions of all kinds. Human rights abuses, including arbitrary detentions, torture and summary executions continue unabated,” he said.

He added that long-standing predictions of the conflict spiralling beyond its borders are coming true, as illustrated by the recent escalation along the Syrian-Turkish border, rounds of small arms fire in the Golan, exchanges of fire into northern Lebanon, as well as a surge in belligerent rhetoric.

“After all the deaths and destruction Syria has suffered, it is plain to see that this conflict cannot be won militarily – and if it were, it would be at an excruciating cost unlikely to lead to a lasting solution that respects the will of the Syrian people,” the Under-Secretary-General stated. “Our priority remains a political solution.”

Secretary-General Ban Ki-moon has urged the Syrian Government to declare a ceasefire to be reciprocated by the opposition armed groups. Mr. Feltman noted that, to succeed, this must be a collective effort by all inside Syria, in the region and beyond, and must include an end to arms transfers to all parties.

In addition to the tens of thousands killed, the uprising against the regime of President Bashar al-Assad that began in March last year, has left 2.5 million Syrians in urgent need of humanitarian aid. It has also caused over 330,000 people to flee to neighbouring Turkey, Jordan, Lebanon and Iraq.

On International Day of Rural Women, Ban calls for more empowerment and end to discrimination 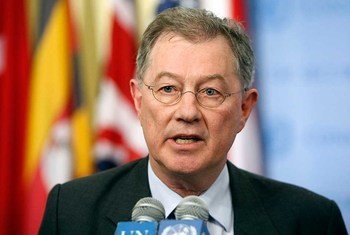 14 October 2012
A top United Nations envoy today said he was alarmed at recent reports that Israeli settlers have repeatedly attacked Palestinian farmers in the West Bank, destroying hundreds of olive trees at the height of the harvest season.