12 October 2012
A partnership to promote the impact of judo in bringing about positive social change was signed today between the United Nations and International Judo Federation (IJF), on the sidelines of the Judo Grand Prix, taking place in Abu Dhabi, the capital city of the United Arab Emirates.

“Judo teaches many of the fundamental values for succeeding in life such as respect for your counterpart and respect of the rules. These are all essential lessons of life, in particular for societies that have been or are in conflict,” said the Secretary-General’s Special Adviser on Sport for Development and Peace, Wilfried Lemke, who signed the two-year partnership agreement on behalf of the United Nations.

“I am glad that today we can formalize the efficient collaboration we have had with the IJF over the past years and I look forward to more meaningful projects together,” he added.

The cooperation between the UN and IJF will mainly be carried out through the Judo for Peace Commission, as well as through the IJF’s involvement in the Youth Leadership Camps of the UN Office on Sport for Development and Peace (UNOSDP).

So far, the IJF has contributed to all three of the camps organized in 2012 by UNOSDP in Qatar, Germany and Switzerland. Each time, an IJF instructor was present to teach the young participants how to use judo for conflict prevention and management purposes, UNOSDP stated in a news release.

Reciprocally, Mr. Lemke and UNOSDP have also contributed to IJF projects and participated in several ‘Judo for Peace’ seminars, where the main topics were judo as an educational tool in peacebuilding activities and the promotion of human rights.

“The United Nations has long recognized the key role that sport federations can play in contributing to human progress and achieving the Millennium Development Goals (MDGs),” Mr. Lemke added, referring to the eight anti-poverty targets including which have a 2015 deadline.

The eight goals, agreed on by world leaders at a UN summit in 2000, set specific targets on poverty alleviation, education, gender equality, child and maternal health, environmental stability, HIV/AIDS reduction, and a ‘Global Partnership for Development.’ 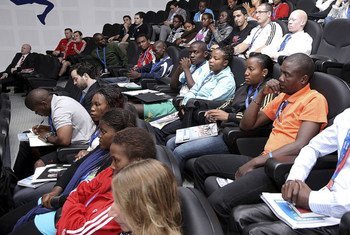 20 January 2012
Twenty-nine young people from nine countries in sub-Saharan Africa and the occupied Palestinian territory enhanced their leadership skills on how to use sport to address social issues affecting their communities during a United Nations youth camp in Doha, Qatar.