Anssi Kullberg
Afghanistan is one of the most vulnerable countries in the world to the impacts of climate change.

11 October 2012
The United Nations is to help Afghanistan combat the effects of climate change, teaming up with the country’s Government to implement a $6 million initiative that aims to operate in vulnerable communities and shore up the ability of Afghan institutions to independently address risks posed by changes to the climate, the world body’s environmental agency announced today.

The scheme is the first of its kind in the landlocked country, where four-fifths of the population is directly dependent on natural resources for income and sustenance, but where disasters and extreme weather events – including drought, sandstorms, and harsh winters – have affected more than 6.7 million people since 1998.

The UN Environment Programme (UNEP), which will serve as the lead UN agency involved in the initiative, identified Afghanistan as one of the countries most vulnerable to climate change because of the potential impacts and the Afghan Government’s current limited capacity to react to those impacts.

Watershed management activities at village level will include tree-planting, the terracing of slopes or the gathering of wild seeds to re-plant over-grazed mountainsides. Education and the development of vocational skills for the communities will also play a key role in this project, according to UNEP.

The Afghan Government will serve as a partner through the country’s National Environmental Protection Agency (NEPA), UNEP said in a news release, with most of the funding coming from the Global Environment Facility (GEF), a UN-backed entity that unites 182 countries in partnership with international institutions, civil society organizations and the private sector to address global environmental issues while supporting national sustainable development initiatives.

“The Government of Afghanistan is showing a remarkable commitment to working with communities for a landscape approach to dealing with climate change in the country,” said the UN Afghanistan Resident Coordinator, Michael Keating, speaking from Bamyan in Afghanistan’s Central Highlands, some 200 kilometres west of the capital, Kabul.

“We also welcome the opportunity to help Afghan institutions better deal with shocks and hazards, and increase resilience at a decentralized level,” he added.

“Many of the agricultural activities in Afghanistan are dependent on the flow of rivers that originate in the Central Highlands area,” UNEP stated. “However, natural ecosystems throughout the country are very fragile, and the degrading effects of increasing human activity in many areas are worsened by current climatic variability, mainly frequent droughts and extreme weather-induced floods and erosion.”

The initiative will be implemented in four locations: Badakhshan in the northeast, Balkh in the north, through the Koh-e Baba to Bamyan and Daikundi in the Central Highlands.

Climate change adaptation is especially important in developing nations, since those countries are “predicted to bear the brunt of climate change effects,” UNEP said in the news release, noting that “the overarching goal is to reduce the vulnerability of biological systems to these impacts.”

UNEP’s key partners on the ground in the Central Asian nation include the UN Food and Agriculture Organization (FAO) and the World Food Programme (WFP) supported by the UN Assistance Mission in Afghanistan (UNAMA), working together with the USAID-funded Biodiversity Programme of the Wildlife Conservation Society (WCS) and local Afghan organizations and communities. 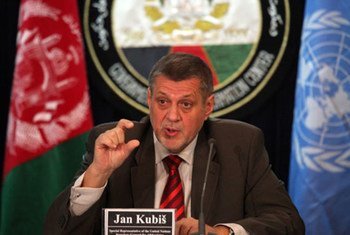 9 October 2012
Despite the impending drawdown of international forces and chronic challenges in governance and security, Afghanistan remains on the path to a hopeful future, the United Nations envoy to the country said today.