“The Secretary-General looks forward to Mr. Prodi’s leadership in shaping and mobilizing an effective United Nations and international response to the complex crisis plaguing the countries and people of this region,” said Mr. Ban’s spokesperson.

The Sahel region, which stretches from the Atlantic Ocean to the Red Sea, and includes Chad, Mali, Mauritania, Niger, and parts of Sudan, Cameroon and Nigeria, is currently facing a swathe of problems, which are not only political but also involve security, humanitarian resilience and human rights.

Mr. Prodi, who served as Prime Minister from 1996-98 and then again from 2006-08, will work closely with the UN family, both at Headquarters and in the field, to coordinate system-wide efforts to finalize and implement the UN Integrated Regional Strategy for the Sahel. He will also conduct wide-ranging consultations with countries in the region, as well as regional and sub-regional bodies and other international partners, on the finalization and implementation of the Strategy.

As Special Envoy, Mr. Prodi will help generate, sustain and coordinate international engagement in support of national efforts of Sahelian countries to address the multifaceted crisis, with an initial focus on Mali.

He will also undertake good offices on behalf of Mr. Ban, particularly in support of national, regional and international mediation efforts in the sub-region, and especially regarding cross-border and transnational issues.

During a press conference in Paris today, Mr. Ban said Mali is undergoing multiple crises that are putting human rights at risk. While the Security Council is discussing the situation, he stressed that more clarification on how the international community can help are needed as soon as possible. 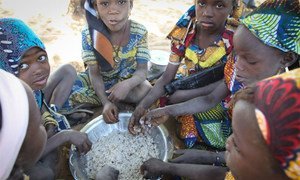 United Nations Secretary-General Ban Ki-moon today called for urgent international support for the people and governments of West Africa’s Sahel region, warning that the area is at a critical juncture with 18 million people affected by a severe food crisis.