2 October 2012
Tanzania has made significant advances in cutting maternal deaths thanks to a United Nations-sponsored programme that brings public and private sectors together to resolve one of the most stubborn but preventable woes afflicting the developing world, top officials said today.

“To sustain and build upon these results, we need partnerships. We need mayors and presidents, grassroots activists and health care workers,” Mr. Ban said, noting that the partnership between the three leaders alone has helped cut maternal deaths by roughly one third in two years in the Kigoma, Morogoro and Pwani regions of Tanzania.

The Global Strategy – developed under Mr. Ban’s auspices with support from The Partnership for Maternal, Newborn & Child Health – was launched at the time of the UN Leaders’ Summit for the Millennium Development Goals (MDGs) in 2010, with some $40 billion pledged towards women’s and children’s health.

It seeks to attain the fourth and fifth of the eight poverty-fighting MDGs that focus on reducing child mortality and improving maternal health.

In his remarks, Mr. Ban noted that President Kikwete was one of the first world leaders to back the Global Strategy and is also one of its main drivers.

He also said that Mayor Bloomberg, well-known for his commitment to improving the health of New Yorkers, is working for the health of women in Tanzania through Bloomberg Philanthropies, which funds efforts to help pregnant women and their babies in rural and isolated areas. Dr. Agerup, he added, is leading the H&B Agerup Foundation to invest in health of women and children over the next few years.

In his remarks, President Kikwete noted that 160,000 women in sub-Saharan Africa die in childbirth annually, as well as 367,000 children under the age of five. “A lot of ground has been covered and a lot has been achieved but we need to scale up efforts because still too many mothers and children continue to die or are at risk of losing their lives,” he said.

“It is not acceptable,” he added. “That is why we must scale up intervention to save these lives. Moreover it is not fair for a woman to die while giving birth, while giving life to another human being. It is not acceptable. Sadly women and children die of causes that can be prevented. We must therefore galvanize humanitarian efforts to prevent more deaths of women and children.”

Mayor Bloomberg said that in 2006 his foundation worked with the Tanzanian Government to improve access to emergency obstetric care at the village level where it is needed most.

“We’ve also helped raise the standards of care for mothers and their children in some of the most isolated parts of the country,” he added, citing two principal initiatives: upgrading existing health centres to perform safe caesarean sections closer to the women who need them, and training more than 100 non-physician clinicians to perform the operation.

Dr. Agerup, in her comments to the news conference, praised Mr. Bloomberg’s contribution. “I can tell you that Bloomberg Philanthropies is doing something that is truly unique and it is something that is absolutely necessary,” she said.

She also showed a video of the programme’s efforts in Tanzania which highlighted haemorrhaging, eclampsia and infections as the major causes of maternal deaths in childbirth, stressing that each mother who dies may be responsible for feeding 10 mouths. 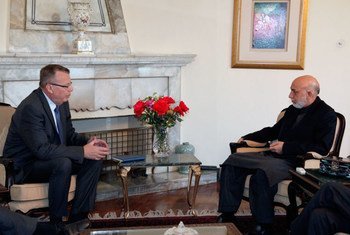 29 May 2012
Highlighting the importance of political commitment and action, the head of the United Nations Office on Drugs and Crime (UNODC), Yury Fedotov, today welcomed efforts by the Afghan Government to combat the menace of trafficking and production of narcotics in the country.