Today’s global challenges demand that the United Nations, as the world’s leading multilateral forum, step up and take the lead in tackling issues such as poverty eradication, sustainable development and the peaceful settlement of conflicts, such as the ongoing violence in Syria, the General Assembly heard today.

“It calls for strategic approaches, focussing on prevention and early action to dismantle problems, rather than on belated responses and interventions to deal with them when it is too late, too inefficient and much more costly,” he said.

And it calls, he added, for the UN to “step up to the plate” and take the lead in addressing these global challenges.

Referring in particular to the situation in Syria, where over 19,000 people, mostly civilians, have died since the uprising began some 19 months ago, Mr. Staur called on the Security Council to act on the information provided by the UN-mandated Independent Commission of Inquiry, which found that that it is likely that crimes against humanity have been committed in the Middle Eastern country.

The Danish official called on the Council to refer the case of Syria to the International Criminal Court (ICC), as well as unite and agree on strong measures, including comprehensive sanctions, stating that the international community cannot afford to continue waiting for a change of policy on the part of a regime that shows no sign of making one. “The Syrian people need action,” he stated.

In his remarks to the Assembly, Portugal’s Permanent Representative to the United Nations, Ambassador Jose Filipe Moraes Cabral, also lamented the situation in Syria. “We are impotent witnesses to a true humanitarian catastrophe and a generalized and systemic violation of the most basic rights of the Syrian people,” he said.

He called for the Security Council to be expanded to reflect the realities of today, not of 1945 when the UN was created, or else lose its credibility.

“It is increasingly difficult for us, as it is for many others, to see that the increasing role of Brazil and India in the international scene has not yet been acknowledged with permanent seats on the Security Council, or that Africa is the only continent without a permanent seat on the Council,” he added.

Archbishop Dominique Mamberti, Secretary for Relations with States for the Holy See.

In his address to the gathering, the Holy See’s representative regretted that the UN lacked the ideal unity it needs despite the crucial contribution the world body has made together with regional bodies in resolving emergency situations, especially in Africa.

“Yet the present reality is that we have a UN system that is devoid of the force of unity and persuasion that could legitimately be expected of it and instead is a place where relationships of force are practiced, often unfortunately for the sake of particular strategic interests,” the Secretary for Relations with States for the Holy See, Archbishop Dominique Mamberti, told the Assembly.

He cited the urgency of the situation in Syria as a flagrant example where the faith has been lost in the value of dialogue and respect for the rules of international and humanitarian law.

The European officials are among scores of world leaders and other high-level officials presenting their views and comments on issues of individual, national and international relevance at the Assembly’s General Debate, which ends later on Monday. 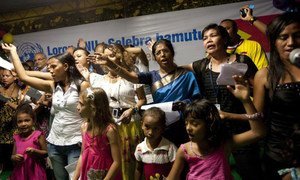