UNESCO/Ron Van Oers
The ancient city of Aleppo in Syria is a World Heritage site.

1 October 2012
Both sides of the Syrian conflict must do all they can to prevent the destruction of Aleppo’s ancient network of markets, the head of the United Nations agency tasked with safeguarding the world’s cultural heritage has said, while calling reports of devastation from the embattled city “deeply distressing.”

“The human suffering caused by this situation is already extreme,” the Director-General of the UN Educational, Scientific and Cultural Organization (UNESCO), Irina Bokova, said in a press release on Sunday.

Aleppo’s souk, known locally as the Souq al-Madina, suffered extensive damage following a blaze yesterday which reportedly destroyed hundreds of shops as fierce fighting between the Syrian army and opposition forces continued throughout the city.

“That the fighting is now destroying cultural heritage that bears witness to the country’s millenary history – valued and admired the world over – makes it even more tragic,” said Ms. Bokova.

The Souq al-Madina, an arcaded area extending some 13 kilometres and replete with stone- and wood-work carvings, is considered to be the world’s most extensive covered market and has long been a coveted tourist destination.

In addition, Aleppo, the largest city in Syria, is also widely reputed to be one of the oldest continuously inhabited cities in the world. Located at the end of the Silk Road, it featured prominently throughout history as a cultural crossroads and its Ancient City, of which the souk is a part, has been a UNESCO World Heritage Site since 1986.

However, recent months have seen the violence of the Syrian conflict take a heavy toll on the city’s cultural and historic heritage as Government forces and rebels have become increasingly entrenched in a bitter stalemate within the city’s walls.

Pointing to the “distressing and dismaying” reports of destruction, Ms. Bokova called for all sides to respect the cultural importance of the Ancient City and safeguard it from any further damage.

She appealed to all forces to “spare these monuments to human history,” recalling that Syria is a signatory to the 1954 Hague Convention for the Protection of Cultural Property in the Event of Armed Conflict.

The Syrian civil war has already killed more than 18,000 people, many of them civilians, and driven hundreds of thousands more from their homes and over the country’s borders since erupting some 19 months ago when protestors first called for the end to President Bashar al-Assad’s regime.

According to media reports citing opposition sources, rebels in Aleppo controlled close to 90 per cent of the Ancient City’s territory following the latest bouts of fighting in the city streets but were struggling under heavy artillery fire from Mr. al-Assad’s army.

Ms. Bokova announced that a UNESCO team was ready to be dispatched to Aleppo to survey the overall damage once the security situation in the city permitted. The team of experts would provide emergency assistance for the protection of the heritage site and seek to mitigate it from any further damage. 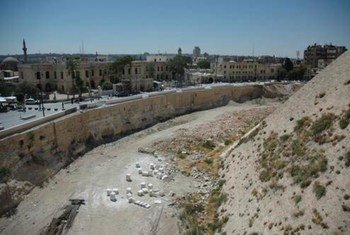 26 July 2012
The head of the United Nations agency tasked with safeguarding the world’s cultural heritage today reiterated her appeal for all parties in the Syrian conflict to protect the Middle Eastern country’s cultural heritage.