Africa must have due representation in Security Council, ministers tell UN debate

African ministers at the United Nations General Assembly to day called for expanding the Security Council to include permanent representation for their continent and stressed the vital role of socio-economic development in ensuring peace.

“The working methods of the Security Council must be revised to ensure democratization, and its membership must be expanded to include new permanent and non-permanent members of the developing world, particularly Africa, the cradle of civilization,” Algeria’s Foreign Minister, Mourad Medelci, said in his remarks to the 67th Assembly’s General Debate, taking place at UN Headquarters in New York.

At present, the Council has 15 members, five of whom are permanent – China, France, Russia, United Kingdom and United States – and which have the right of veto.

In his statement, Mr. Medelci also highlighted the need for economic development as an essential pillar for ensuring lasting stability.

“We firmly maintain that development, peace and security are indivisible and that UN strategies, in particular those of the Security Council aimed at a lasting peace, must be devised in full harmony with policies for socio-economic development,” he said.

In his address to the General Debate, Mauritania’s Foreign Minister, Hamadi Ould Baba Ould Hamadi, reaffirmed his country’s support for UN reform, in particular by expanding the Council to include a permanent seat for Africa and another for the Arab group.

Reciting a litany of problems facing developing countries, from unemployment and the rise in food prices to an economic slowdown stemming from the global economic crisis, he appealed to the developed world to live up to its commitments.

“We ask the rich countries and the donor organizations to honour their pledge to make contributions, however insignificant, to finance development, above all for the least developed countries, so as to achieve acceptable levels of access to public services to guarantee civil peace, stability and the social cohesion of these countries in order to safeguard world peace,” he said.

The two ministers also voiced alarm at new threats of terrorism and the situation in Mali, where Islamic militants have seized control of the north, imposing strict Sharia law and sending more than 260,000 refugees fleeing into neighbouring countries, more than 110,000 of them in Mauritania.

Chad’s Foreign Minister, Moussa Faki Mahamat, in his remarks to the Assembly, called on the Security Council to quickly adopt a resolution authorizing international military intervention in northern Mali, as sought by the Economic Community of West African States (ECOWAS).

“The Mali crisis is a test and a challenge confronting the international community,” he said. “Today, with this crisis, violent obscurantist religious fundamentalism, trafficking in drugs and humans and irredentist demands are implanted right in the heart of Africa.”

He added, “How long can the world stand by in the face of this gangrene which risks spreading throughout the whole of the Sahel region and of which Mali is only the epicentre?”

The ministers are among of scores of world leaders and other high-level officials presenting their views and comments on issues of individual, national and international relevance at the Assembly’s General Debate, which ends on 1 October. 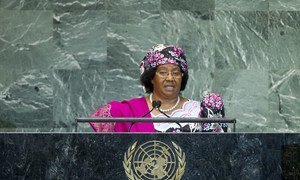