The top United Nations political official for Somalia today said he was shocked and alarmed by the killing of seven journalists in the capital, Mogadishu, over the past month.

“I am appalled by the rise of violence targeting media professionals in Somalia,” said the Special Representative of the Secretary-General for Somalia, Augustine P. Mahiga, in a statement.

“I send my deepest condolences to the families of the victims and the Somali media community, which has endured death threats, intimidation and assassination attempts for too long.”

The total number of Somali journalists killed this year has now risen to 15 while more than 20 have been reportedly injured. The UN has repeatedly called on the Somali authorities to conduct independent and swift investigations into the killings and to bring an end to the cycle of violence and to impunity.

According to the UN Political Office for Somalia (UNPOS), the body of sports journalist Abdirahman Mohamed Ali was found yesterday evening beheaded at a former animal market in Mogadishu, and Ahmed Abdullahi Fanah, a reporter for the Yemeni news agency SABA, was reportedly shot dead earlier today.

On 21 September, Hassan Youssouf Absuge, a well-known radio journalist, was shot dead as he left the studios of Radio Mantaa, an independent station for which he was the programme director.

In addition, three journalists – Liban Ali Nur, head of news at Somali National TV, Abdisatar Daher Sabriye, head of news at Radio Mogadishu, and Abdirahman Yasin Ali, director of Radio Hamar (Voice of Democracy) – were killed and four others injured in a double suicide-bombing at a popular restaurant frequented by journalists in Mogadishu on 20 September.

Four days earlier, Zakariye Mohamed Mohamud Moallim, who worked as an independent cameraman, was shot dead in the Nasib Bundo neighbourhood of the capital.

“Somalia has entered a new phase. The media needs to be protected in order for the fundamental rights of freedom of expression and freedom of the press to be exercised,” said Mr. Mahiga, adding that “these are preconditions for the construction of a healthy democratic state.”

Mr. Mahiga reiterated UNPOS’ call on the Somali authorities to improve its police investigative capacity and said the office stands ready to assist whenever possible. 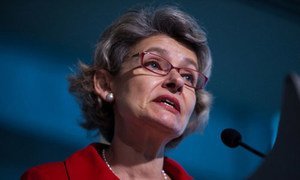 UNESCO chief alarmed by upsurge in killing of journalists in Somalia

The head of the United Nations agency tasked with defending press freedom today expressed her concern and anger over the killing of five journalists in Somalia in the past week.