The international community’s failure to resolve the Syrian crisis through peaceful means must not lead it to neglect the search for political solutions to other crises, Grand Duke Henri of Luxembourg told the General Assembly at its high-level debate today.

“This crisis is a challenge to our conscience. It puts our commitment to a hard test. Some are tempted to accuse the United Nations of inaction. But the guilt lies elsewhere,” the European nation’s Head of State told the General Debate, which began at UN Headquarters in New York on Tuesday.

“Luxembourg firmly believes that those responsible for the terrifying violence, the war crimes, the egregious human rights violations and crimes against humanity committed in Syria, will one day have to answer for them,” he added.

In his statement, Grand Duke Henri noted his country’s dedication and contribution to the peaceful settlement of international disputes, particularly highlighting its consistent calls for the peaceful resolution of the Israeli-Palestinian conflict.

“This conflict has been going on for too long. It is essential that the parties start new direct negotiations and negotiate a sustainable peace, with the support of the Quartet,” he said. “The path will be arduous, no doubt, but the objective is worth it, for the Israelis and the Palestinians and the entire region: an independent, democratic, contiguous and viable State of Palestine, living side by side with the State of Israel in peace and security.”

Luxembourg has been supporting the building of a Palestinian State, on political and economic levels, providing financial support to the Palestinian Authority and aiding its efforts to make public administration and basic social services work. The European country also contributes to the activities of the UN Relief and Works Agency for Palestine Refugees in the Near East (UNRWA), which provides assistance, protection and advocacy for some five million registered Palestine refugees in the Middle East, pending a solution to their plight.

Luxembourg further contributes to the peaceful settlement of conflicts by providing financial aid to preventive diplomacy and mediation activities and to the ‘good offices’ activities undertaken by the United Nations, the Grand Duke said, adding that regional organisations like the African Union also benefit. Luxembourg has also been heavily involved in the UN Peacebuilding Commission since its inception in 2005.

In addition to other methods, UN Secretary-General Ban Ki-moon uses his ‘good offices’ – steps taken publicly and in private, drawing upon his independence, impartiality and integrity – to prevent international disputes from arising, escalating or spreading.

In addition, the fight against poverty is also one of the European nation’s priorities, the Grand Duke stated, adding that since 2000, Luxembourg has reached the objective set by the United Nations by dedicating at least 0.7 per cent of its gross national income to official development assistance.

“To ensure durable peace, one must tackle the root causes of conflicts. Among these root causes, Luxembourg is concentrating specifically on two of them: social inequality resulting from persistent poverty and the increasing scarcity of natural resources, resulting from climate change,” he said.

Other topics covered in his remarks included disarmament and the reform of the United Nations, particularly of the Security Council’s membership.

Grand Duke Henri is one of scores of national leaders and other high-level officials who are presenting their views and comments on issues of individual national and international relevance at the Assembly’s General Debate, which ends on 1 October. 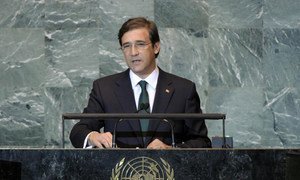 Portugal has called at the United Nations for concerted efforts to tackle global financial instability and create conditions for economic growth and jobs, stressing the need to correct inequalities and strengthen international monetary security.