21 September 2012
Thousands of United Nations peacekeepers around the world will soon be able to improve their natural resources management through a training programme launched today by the world body's environmental agency.

“The 'blue helmets' carry out demanding work, in difficult situations, where clean water, forests and other key resources are often already under pressure. This training programme is a critical step towards making peacekeeping operations more sustainable and effective,” the Executive Director of the UN Environment Programme (UNEP) Achim Steiner, said in a news release.

“Such greening measures can serve to reduce conflict, and to make an important contribution to global efforts to improve resource efficiency and meet the challenges of climate change,” he added.

According to the UN Department of Peacekeeping Operations (DPKO), there are close to 120,000 people serving as UN peacekeepers – in military, police and civilian capacities – in 16 DPKO-led peace operations around the world.

The course, which is expected to be delivered to thousands of military, police and civilian peacekeepers over the next year through an online learning platform, follows the Greening the Blue Helmets report produced by UNEP earlier this year, which analyzed how peacekeeping missions around the world affect, and are affected by, natural resources and the broader environment.

The study found that while UN peacekeeping operations play a key role in the recovery and stability of countries emerging from conflict, they have a large environmental footprint and can place considerable demands on local resources in fragile environments. The report makes a set of recommendations as to how sustainability measures can be improved in all missions.

A number of peacekeeping missions have already adopted environmental policies and undertaken a range of measures to improve resource efficiency, UNEP said in a news release.

The UN Interim Force in Lebanon (UNIFIL) has introduced several environmental practices, ranging from the use of electric cars at the mission's headquarters in the southern town of Naqoura, to energy-efficient power generation and the establishment of a community-led recycling plant.

At the UN Integrated Mission in Timor-Leste (UNMIT), switching off equipment or adjusting room temperature settings have resulted in a 15 per cent reduction of energy consumption. According to UNEP, a simple measure like this one could save $95.7 million annually if it was implemented across all missions.

The new training programme, which was compiled with the technical assistance of the UN Institute for Training and Research (UNITAR) and the International Institute for Sustainable Development (IISD), aims to disseminate these good practices to all missions and to encourage investments in new technologies, practices and behaviours that can reduce the overall environmental footprint of peacekeeping.

The launch of the programme also marks the 20th anniversary of the International Day of Peace, which is being commemorated this year under the theme “Sustainable Peace for a Sustainable Future.” 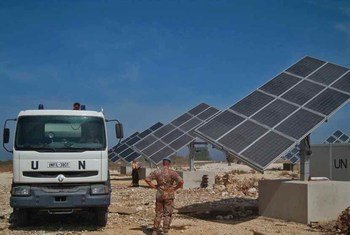 1 May 2012
Reducing the environmental impact of United Nations peacekeeping operations can lead to increased financial savings for the missions as well as improved safety and security for local communities and UN personnel, says a new report by the world body.