13 September 2012
The top United Nations envoy in Libya today congratulated Mustafa Abushagur on his election as the new Prime Minister of the North African nation.

“Ian Martin extends his warmest congratulations,” according to a news release issued by the UN Support Mission in Libya (UNSMIL), which Mr. Martin, the Secretary-General’s Special Representative (SRSG) for the country, heads.

According to media reports, Libya’s Deputy Prime Minister Mustafa Abushagur was elected Prime Minister on Wednesday, and now has up to 30 days to form a cabinet. The US-trained optical engineer reportedly defeated wartime rebel premier Mahmoud Jibril in a second round vote in the 200-member General National Congress, by 96 votes to 94, in a voting process that was broadcast live on national television.

“SRSG Martin reiterates the readiness of UNSMIL and the UN family in Libya to work closely with Prime Minister Abushagur and his upcoming government, as well as with the GNC to support Libya's democratic transition and their efforts in addressing the country's priorities,” UNMSIL noted in its press release.

The GNC’s election is the latest step in Libya’s transition toward a modern democratic State, after decades of autocratic rule and toppling of the regime of Muammar al-Qadhafi. It follows other key steps, such as the elections for the GNC, and that body’s transparent election of a President and two Vice-Presidents, in accordance with the country’s Constitutional Declaration.

Colonel Qadhafi ruled the North African country for more than 40 years until a pro-democracy uprising last year – similar to the protests in other countries in the Middle East and North Africa – led to civil war and the end of his regime.

Addressing a Security Council meeting on the situation in Libya on Wednesday, the UN Under-Secretary-General for Political Affairs, Jeffrey Feltman, said that foremost among the challenges facing the Libyan people is security, pointing to arms outside state control, lack of clarity and competition over security responsibilities between and within relevant institutions and the continued prevalence of armed brigades.

In addition to these concerns, Mr. Feltman said border security remains a top national priority to combat the smuggling of arms, drugs, human trafficking and illegal migration, as well as the spread of transnational organized crime. 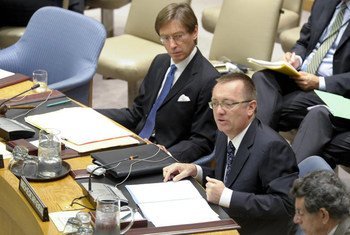 12 September 2012
Yesterday’s attack on the American diplomatic presence in Benghazi, Libya, which killed the United States ambassador and three other diplomats, was a “sobering reminder” of the serious security challenges that persisted even as the country made steady progress toward democracy, the United Nations’ top political official told the Security Council today.