Sierra Leone is making steady progress in rebuilding after a devastating civil war, United Nations officials told the Security Council today, adding that forthcoming elections are an opportunity to further consolidate peace and the achievements of the past decade.

“The successful conduct of elections will demonstrate the maturity of Sierra Leone’s political leadership and institutions, as well as the consolidation of the democratic process in the country,” the Secretary-General’s Executive Representative in Sierra Leone, Jens Anders Toyberg-Frandzen, said in his briefing.

Mr. Toyberg-Frandzen, who heads the UN Integrated Peacebuilding Office in Sierra Leone (UNIPSIL), said major electoral arrangements, with technical assistance from the UN, are on track. In addition, training of the police and the provision of the necessary logistics are well under way, since providing an enabling security environment for the electoral process will be crucial.

Addressing the same meeting, Ambassador Guillermo E. Rishchynski of Canada, who serves as chair of the Sierra Leone configuration of the UN Peacebuilding Commission, told Council members that the country faces an important moment in its history.

“The elections scheduled for November represent a crucial test and are widely viewed as a core benchmark for peace consolidation,” he said.

Mr. Rishchynski noted that while there is good reason to expect technically sound and well-managed elections, the greater challenge is political. “All national stakeholders must fulfil their responsibility to create an environment conducive to success elections,” he said.

The Commission, he added, plans to travel to the capital, Freetown, next month to “take stock of the situation” and engage with all relevant stakeholders ahead of the polls.

Both men stressed that several of the country’s remaining challenges are long-term in nature and will require sustained investment over a substantial period of time. These include unemployment, especially among young people, corruption, high living costs, and transnational organized crime.

“Sierra Leoneans have demonstrated tremendous determination in rebuilding their country after a devastating civil war,” said Mr. Rishchynski. “The international community needs to continue standing shoulder to shoulder with them in the years to come.”

Sierra Leone, whose civil war ended in 2002, was the first country, together with Burundi, to be put on the agenda of the UN Peacebuilding Commission when it was set up in 2006 to prevent post-conflict countries from relapsing back into bloodshed. 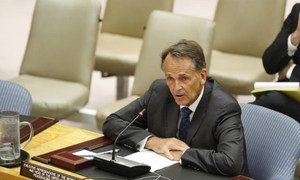 Ahead of presidential elections later this year and amidst reports of the importation of assault weapons, the outgoing head of the UN Integrated Peacebuilding Mission in Sierra Leone (UNIPSIL) today called on the country’s political establishment to put the country’s national interests ahead of its own political ambitions.