“We urge all States, who have not yet done so, to introduce – or reintroduce – an official moratorium on the use of the death penalty aiming to abolish it,” Rupert Colville, spokesperson for the Office of the UN High Commissioner for Human Rights (OHCHR), declared in a briefing to the press in Geneva.

Until now, Gambia was at the forefront in Africa in its efforts to abolish the death penalty in law and practice. Last week, however, in a strong reversal of that trend, nine prisoners were executed shortly after Gambian President Yahya Jammeh’s announcement that all people on death row would have their sentences carried out by mid-September.

Mr. Colville deplored the executions as a “tremendous regression” for the country’s justice system, noting that prior to last week the country had maintained a moratorium on the death penalty for 27 years and had abolished capital punishment for drug offences in April 2011.

He also pointed to the number of executions in Iraq, where 96 people have had their death sentences carried out since the beginning of 2012. During the month of August alone, 26 people have reportedly been executed, including 21 in a single day.

“Given the lack of transparency in court proceedings in Iraq, major concerns about due process and fairness of trials, and the very wide range of offences for which the death penalty can be imposed in Iraq, it is a truly shocking figure,” said Mr. Colville.

In a message issued yesterday, the UN High Commissioner for Human Rights, Navi Pillay, warned that international law, including the International Covenant on Civil and Political Rights (ICCPR), requires compliance with rigorous fair trial standards in cases where death sentences are imposed.

OHCHR’s concern over the Iraqi executions was also echoed by the UN Assistance Mission for Iraq (UNAMI) in a separate statement released today, in which it urged the Government of Iraq to consider a moratorium on the implementation of all death sentences and to consider ratifying the Second Optional Protocol to the ICCPR, with a view to the eventual abolition of the death penalty.

Meanwhile, in his press briefing, Mr. Colville also expressed concern that two men hanged in the South Sudanese capital of Juba, on 21 August, did not have proper legal assistance.

The overall global trend on the use of the death penalty has seen the number of executions worldwide decline. An estimated 150 UN Member States have abolished the death penalty or introduced a moratorium, either in law or practice.

♦ Receive daily updates directly in your inbox - Subscribe here to a topic.
♦ Download the UN News app for your iOS or Android devices.
death|penalty 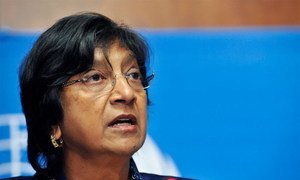 The United Nations human rights chief today urged Gambian authorities to impose an immediate moratorium on the use of the death penalty, after nine people were executed on Sunday and President Yahya Jammeh announced that all remaining death row inmates would be executed, by firing squad, by mid-September.