The United Nations envoy for Somalia today voiced deep concern at the ongoing delays in finalizing the list of new parliamentarians, warning that it might threaten the electoral calendar.

After decades of warfare, Somalia has been undergoing a peace and national reconciliation process, with the country's transitional federal institutions implementing a so-called Roadmap for the End of Transition.

The measures to end the transition included the drafting of a new Provisional Constitution, and the selection of the Members of Parliament by a group of 135 traditional Somali Elders, with the advice of a Technical Selection Committee.

The Elders and the Technical Selection Committee need to ensure that all oustanding issues are resolved by tomorrow, 26 August, for preparations to be in place for the Parliament to elect a Speaker and Deputy Speaker on Tuesday.

Augustine P. Mahiga, the Secretary-General's Special Representative for Somalia, urged them to continue working together “in a spirit of mutual trust and flexibility” to fulfill their responsibilities, according to a statement issued in the capital, Mogadishu.

“The candidates for the Speakership will deliver their speeches tomorrow and make their presentations in preparation for the Speaker's election day on Tuesday, 28 August. So there is no time for delay,” he said in a statement.

The inauguration last week of a New Federal Parliament marked the long-awaited end of the transitional period in the Horn of Africa nation.

“Last Monday, 20 August, the most qualified Parliament in the recent history of Somalia was inaugurated,” said Mr. Mahiga, who is also head of the UN Political Office for Somalia (UNPOS).

“We are just a few critical steps away from fully ending the transitional period. We must all support this effort to ensure that the complete number of the new Somali lawmakers begin their vital work immediately.” 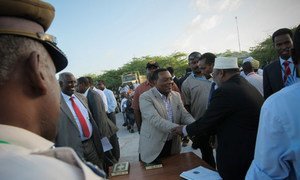 United Nations Secretary-General Ban Ki-moon welcomes the inauguration today of the New Federal Parliament of Somalia as a major milestone in the nation's peace and reconciliation process, according to his spokesperson.