23 July 2012
Secretary-General Ban Ki-moon today voiced concern about the possible use of chemical weapons in the Syrian conflict and stressed the need for the international community to keep a close eye on the situation.

“It would be reprehensible if anybody in Syria is contemplating use of such weapons of mass destruction, like chemical weapons,” Mr. Ban told reporters in Belgrade, Serbia, where he is on an official visit.

“I sincerely hope that the international community keeps an eye on this so that […] no such things happen,” he stated, while also adding that he was not able to verify that the Middle Eastern country has a “considerable amount” of chemical weapons.

He also noted, with concern, that Syria is not a party to the Organisation for the Prohibition of Chemical Weapons (OPCW). The OPCW is the implementing body of the Chemical Weapons Convention, which aims to aims to eliminate an entire category of weapons of mass destruction by prohibiting the development, production, acquisition, stockpiling, retention, transfer or use of chemical weapons by States Parties.

The Syrian Government reportedly said today that it will use its chemical and biological weapons against foreign attack, while adding that it would not use them against its own citizens.

Mr. Ban said the United Nations is closely coordinating and consulting with all of the parties concerned, and that he will be discussing the issue of the weapons with his counter-part at the League of Arab States, Nabil Elaraby.

Meanwhile, the UN Under-Secretary-General for Peacekeeping Operations, Hervé Ladsous, and the UN Military Adviser, General Babacar Gaye, are leaving today for Syria, where they will assess the situation on the ground.

Gen. Gaye will take part in the UN Supervision Mission in Syria (UNSMIS) for the next month, following the departure of General Robert Mood, the Chief Observer and head of Mission.

UNSMIS has been tasked by the Security Council with monitoring the cessation of violence in Syria, as well as monitoring and supporting the full implementation of the six-point peace plan put forward by the Joint Special Envoy for the UN and the Arab League for the Syrian Crisis, Kofi Annan.

“I’m urging again, all the parties – all the Syrian Government forces and opposition forces – they must stop fighting. They must stop using violent means in addressing the situation,” said Mr. Ban, stressing the need to exert all possible efforts to help the Syrian people overcome the crisis. 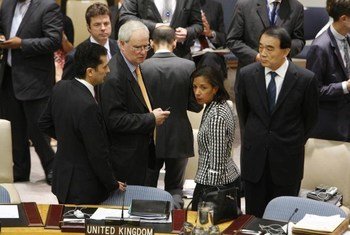 20 July 2012
The Security Council today renewed the mandate of United Nations observers tasked with monitoring the cessation of violence in Syria and the full implementation of the international peace plan put forward to end the ongoing crisis.