The United Nations human rights chief today called for the appeal trial in the case of a murdered Congolese human rights defender, Floribert Chebeya Bahizire, and the disappearance of his driver, to fully respect international standards of due process.

“The importance of this trial cannot be overstated,” the UN High Commissioner for Human Rights Navi Pillay, said in a news release. “Mr. Chebeya was a pioneer of the human rights movement in the Democratic Republic of the Congo (DRC) and his murder sent a devastating blow to human rights defenders across the country.”

Mr. Chebeya was found assassinated on 2 June 2010 on the outskirts of DRC’s capital, Kinshasa. More than a year later, the military court of Kinshasa/Gombe convicted five policemen, three of them in absentia, of murder, illegal arrest and detention, as well as abduction. The Inspector-General of the National Congolese Police was suspended in connection with the case in 2010, but was never formally charged. The next hearing of the ongoing appeal trial is scheduled to take place today.

“A number of due process issues have been raised about the original trial, including that key witnesses were not interviewed,” Ms. Pillay said, calling on the Congolese judicial authorities to take all necessary measures to ensure that the appeal is fully in line with international standards of due process.

“Given the possible involvement of high-level authorities in these crimes, it would be advisable to appoint sufficiently high-ranking judges to preside over the trial,” she added.

The High Commissioner also noted serious concerns about the security and proper preservation of important new information that has recently come to light. “Any evidence must be secured and preserved with great care,” she said.

Ms. Pillay noted that two years after Mr. Chebeya’s murder, the situation of human rights defenders in the DRC remains precarious, and that the conduct of this case will be seen “as a reflection of the new Government’s commitment to the independence of the judiciary and respect for due process.”

She also called on the DRC’s new Parliament to adopt draft laws for the protection of human rights defenders, as well as for the creation of an independent national human rights commission as soon as possible, and reiterated her office’s readiness to provide assistance to the Congolese authorities to this end. 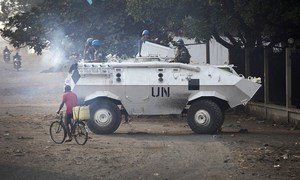