In a statement issued to the press, Council members reiterated their demands that the M23 and all armed groups, including the Democratic Forces for the Liberation of Rwanda (FDLR), cease immediately any further advances and all forms of violence in eastern DRC.

“The members of the Security Council reiterate their condemnation of all outside support to all armed groups in the DRC and their demand that all forms of support to them cease immediately,” the Council members said in the statement. “They further call upon all countries in the region to cooperate actively with the Congolese authorities in demobilizing the M23.”

Peacekeepers serving with the UN Organization Stabilization Mission in DRC (MONUSCO) have been aiding national army soldiers in recent weeks, supporting the latter’s efforts to halt the M23, which is composed of renegade soldiers who mutinied in April and are reportedly led by Bosco Ntaganda, an army general wanted by the International Criminal Court (ICC) for war crimes.

The Council members urged that the commanders of M23, including Mr. Ntaganda, be apprehended and brought to justice.

“They further express deep concern with the sharply deteriorating situation in the North Kivu province of the DRC and the worsening of the humanitarian situation in the eastern part of the DRC, the increasing number of displaced persons and refugees and reports of both sexual violence and the use of child soldiers,” said the statement.

The 15-member body also reiterated its full support for MONUSCO and its operations in eastern DRC, including their efforts to assist the Congolese Government in protecting civilians displaced or threatened as a result of the violent activities of armed groups.

Ten days ago, an Indian ‘blue helmet’ was killed in a cross-fire amidst clashes between the Congolese national armed forces, known as FARDC, and M23 fighters in the eastern province of North Kivu.

The Council members also said that anyone responsible for attacks against civilians or MONUSCO personnel must be held accountable and brought to justice. 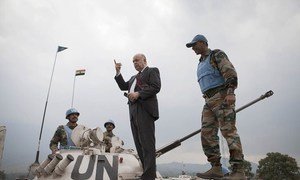 The United Nations peacekeeping mission in the Democratic Republic of the Congo (DRC) used two of its attack helicopters on Thursday in support of the country’s armed forces to deter rebel soldiers – known as M23 – near the villages of Ngugo and Nysisi in North Kivu.