UNOCI
UNMAS cut up weapons in close collaboration with the National Commission of Small Arms and Light Weapons of Cote d'Ivoire (COMNAT-CI).

13 July 2012
Some 600 small arms and light weapons have been wiped out in Côte d’Ivoire over the last two days by the United Nations Mine Action Service (UNMAS) as part of the country’s first weapon destruction exercise since the 2011 post-election crisis.

UNMAS began cutting up the weapons stored at the camp in Abidjan, the country’s commercial capital, of the Togolese peacekeeping contingent serving with the UN Operation in Côte d’Ivoire (UNOCI) yesterday.

The two-day exercise is the result of close collaboration between UNMAS and the National Commission of Small Arms and Light Weapons of Côte d’Ivoire (COMNAT-CI), and is part of the celebration of the International Small Arms Destruction Day, observed on 9 July.

The arms were collected by UNOCI staff working in disarmament, demobilization and reintegration (DDR) of ex-combatants during ad hoc weapon collection operations across the country.

“The destruction of weapons in Côte d’Ivoire is an important milestone for the mine action programme,” said the UNMAS Programme Manager in Côte d’Ivoire, Charles Frisby.

“Having secured the consensus of all stakeholders, including the National Commission on Small Arms and Light Weapons to proceed with destruction, we can now contribute in a concrete manner to the reduction in armed violence,” he stated, adding that UNMAS will support the Government in destroying the small arms collected since the end of the post-election crisis.

In late 2010, Côte d’Ivoire was the scene of intense fighting after Alassane Ouattara won a disputed presidential run-off election, leading to months of deadly violence when the runner-up and incumbent Laurent Gbagbo refused to step down.

Amongst UNOCI’s Security Council-mandated tasks is to help “national authorities, including the National Commission to fight against the Proliferation and Illicit Traffic of Small Arms and Light Weapons, in collecting, registering, securing and disposing of weapons and in clearing explosive remnants of war, as appropriate.”

According to UNMAS, since July 2011, COMNAT-CI has conducted 36 ad hoc weapon collection operations across the country, with UNOCI’s support, recovering 1,811 weapons and 316,600 munitions. This weaponry is collected and stocked in different military bases of UNOCI. 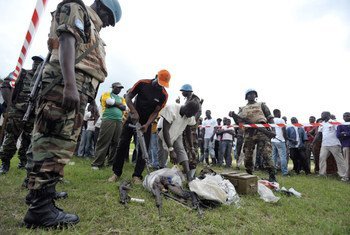 1 February 2012
A United Nations voluntary disarmament operation began today in a suburb north of the Ivorian city of Abidjan, aiming to collect illegal weapons still in circulation among the civilian population.