Upper Manhattan is not the usual stomping ground for the head of the United Nations Office on Drugs and Crime (UNODC), the part of the UN charged with helping in global efforts against illicit drugs, crime and terrorism.

While in New York to launch the 2012 World Drug Report recently, UNODC's Executive Director, Yury Fedotov, travelled to Post Avenue in Inwood to meet with people in the neighbourhood and learn about local efforts to end drug abuse.

The visit was organised by the Community Anti-Drug Coalitions of America (CADCA), and hosted by UNIDOS Coalition, a New York-based community organisation and member of CADCA, which is working in Inwood to help address drug abuse and other problems affecting young people in the neighbourhood.

“My purpose for being here today is, first and foremost, to support organisations such as [the] CADCA association, and others, hard and diligently – they are our partners in many respects,” Mr. Fedotov told the UN News Centre as he walked the streets of Inwood.

“We are working very closely with the CADCA association, and it is the first time I have visited them and seen what they are doing in the field and indeed, it is very impressive, he noted. “All together, UNODC is working with hundreds of NGOs throughout the world and if we have best practices and experience to share, it will be better for us to deliver.”

Alongside Mr. Fedotov was his guide for the visit, the UNIDOS-Inwood Coalition Program Director, Angelo Ortiz, who explained the challenges and approach in dealing with local drug-related issues.

Mr. Fedotov speaks about his visit to Inwood.

“We started the community approach because we saw there was a problem. There was a lot of youth violence, a lot of teen pregnancies and a lot of drug use, so we started talking to people and build relationships to getting people interested in doing something about the problem in a coordinated way,” Mr. Ortiz said.

“The only way to sustain change is when communities own the change, when they own the process for change. That is the critical point of all the work we have done, and that can be used across the world,” he added.

The UNIDOS Coalition reaches some 1,000 young people in the Inwood area through direct activities with families, and by implementing numerous comprehensive community interventions to address the conditions in the environment that contribute to substance abuse and crime. So far the Coalition has developed and implemented around twenty different interventions for children, teenagers, and their families.

Welcoming Mr. Fedotov’s presence, two of them – Hazel Pina and Jannia Mercedes – spoke of their own experiences with drug-related problems, and how those experiences prompted their engagement with other youth, to promote awareness of the negative effects of alcohol consumption, drug abuse and teenage pregnancies.

“I have a personal testimony: my father was a drug addict and my parents were trying to keep it away from me, but I knew what was happening – I was not a stupid child,” Ms. Pina said. “My brother was initiated into one of the drug-dealing businesses here on this block and there were always problems; there were always gangs after him and he was often in jail. Even to this day, one of the major drug sellers on the streets today makes young people sell drugs for them and it is really bad. Something must be done to catch those people because they keep expanding in this community.”

Hazel Pina and Jannia Mercedes, members of the local Washington Heights-Inwood Youth Council speak about the drug problem in their neighborhood.

Ms. Mercedes said, “I think we have a big drug issue, primarily because of the culture. People abuse marijuana and cocaine and it is considered so normal in our community. It is seen as OK for people to do it. They do not hide, they use it out in the streets, in the parks among little kids.”

Briefed on the situation in Inwood and seeing it first-hand, Mr. Fedotov noted that the importance of health being taken into consideration in anti-drug policies.

“We are trying to help people, and all UN conventions on drug control are health-oriented,” he said. “It is important to strike the right balance between our efforts to support law enforcement and to support health issues to prevent, to treat and to rehabilitate drug addicts and to help them to recover.”

“It happens that I lived in New York in the 90s and the sharp contrast between then and now is a result of the role of civil society – actually, they [civil society organisations] helped to change their neighbourhoods and that is what we call preventive treatment, which is very important to UNODC,” he said. 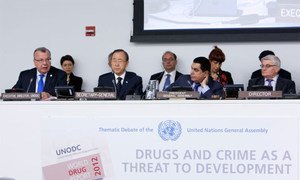 Highlighting the impact of drug abuse around the world, the head of the United Nations anti-drugs office today said that countering transnational organized crime and illicit drugs must become an integral part of the development agenda.