“Engouraging progress” was made by countries on the final day of the last round of talks aimed at reaching agreement on the outcome document of the United Nations Conference on Sustainable Development (Rio+20), a UN official said today.

The Rio+20 Secretary-General, Sha Zukang, stressed that advances were made by the splintered negotiation groups last night, with 37 per cent of the text having been agreed on by stakeholders.

The third and final session of Rio+20's Preparatory Committee concluded yesterday and was followed by a ceremony handing over the responsibility for the outcome document to Brazil, which holds the presidency of the Conference. The South American nation will now decide on how to proceed to achieve progress on the economic, social and environmental issues at the centre of the negotiations.

“The Conference has entered a new phase,” the Head of the Rio+20 Secretariat, Nikhil Seth, told reporters in Rio de Janeiro this afternoon.

During the handover ceremony, Brazilian Foreign Minister Antonio Patriota announced that the consultation process on the outcome document is expected to conclude on 18 June. It will then be put forward for adoption by Member States when they meet from 20 to 22 June.

While there has been progress, big issues still remain to be resolved, Mr. Seth noted at the press briefing. These include the reaffirmation of the principles put forward during the first Rio Summit 20 years ago, and the means of implementation of these principles which include technology transfer, financing and capacity-building for developing countries.

Meanwhile, the Rio+20 Global Dialogues kicked off today, with civil society experts, scientists and other major groups discussing key issues linked to the Conference with the public. The dialogues will lead to recommendations, which will then be transmitted to heads of State during the high-level meeting next week.

The dialogues, which are organized by the Brazilian Government, will end on Tuesday. 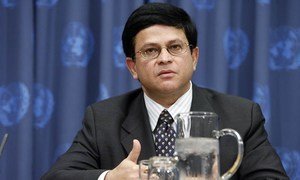 There is a sense of “cautious optimism” among delegates negotiating the outcome document of the United Nations Conference on Sustainable Development (Rio+20), a UN official said today.