UNHCR/M.Hofer
A woman and her son at a site near Dungu in the DRC after they fled Lord's Resistance Army (LRA) attacks.
14 June 2012

Noting the recent resurgence in attacks by the Ugandan rebel Lord’s Resistance Army (LRA) in countries in Central Africa, Secretary-General Ban Ki-moon has appealed for international support for regional efforts to eliminate this threat and address the impact of its activities.

“I call upon the international community to support the implementation of a coordinated regional strategy to address the threat and the impact of LRA activities,” Mr. Ban writes in his latest report on the activities of the UN Regional Office for Central Africa (UNOCA) and developments in relation to the LRA.

“Only by providing the necessary resources will we be able to ensure the success of continuing efforts by the national authorities, the African Union and other international partners in this regard,” he adds.

The LRA carried out the worst of its atrocities in northern Ugandan in the 1990s, but had, by 2004, largely been driven of the area through a sustained military effort. However, remnants of the insurgent group continued to attack civilians in South Sudan, the Central African Republic and Democratic Republic of the Congo (DRC).

Led by Joseph Kony, the group is notorious for carrying out massacres in villages, mutilating its victims and abducting boys for use as child soldiers, while girls are forced into sexual slavery.

After a lull in LRA raids in the second half of last year, attacks against civilians in LRA-affected areas were again on the rise this year in the Central African Republic (CAR) and the DRC, with 53 incidents reported in the first quarter of 2012, according to the Secretary-General’s report.

As of 31 March, more than 445,000 people had been displaced or were living as refugees because of LRA activities in CAR, DRC and South Sudan, with an estimated 341,000 internally displaced persons in DRC’s Orientale province alone.

In the report, Mr. Ban says he is encouraged by the growing cooperation among stakeholders working to eliminate the threat posed by LRA. In March, the four countries affected by the LRA’s activities launched a joint military task force to pursue the rebel fighters.

In addition, a regional strategy for international humanitarian and development assistance, as well as peacebuilding in areas affected by the LRA violence, is being finalized, under the coordination of the Special Representative of the Secretary-General and head of UNOCA, Abou Moussa, and the African Union Special Envoy for the LRA issue, Francisco Madeira.

Also, the UN presences in the LRA-affected countries, including the UN Integrated Peacebuilding Office in CAR (BINUCA), and the UN Organization Stabilization Mission in DRC (MONUSCO) and the UN Mission in South Sudan (UNMISS), together with UN country team partners, are developing a regional strategy to expand disarmament, demobilization, repatriation, resettlement and reintegration initiatives throughout the LRA-affected areas.

In his report, Mr. Ban also notes that piracy and armed robbery at sea in the Gulf of Guinea remain a major challenge to the countries of the region. He called on partners to continue to support the affected States in their efforts to address this “most worrisome phenomenon” promptly and effectively. 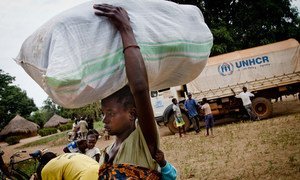 The United Nations refugee agency today spoke out about an increase in the number of attacks in recent weeks by the Lord’s Resistance Army (LRA) in central Africa, leading to the displacement of thousands of people.