African countries must pursue structural transformation to sustain growth, create jobs and reduce vulnerability to external shocks, says a United Nations report released today, while another publication urges governments on the continent to do this in a way that protects the environment.

The Economic Report on Africa 2012, produced by the UN Economic Commission for Africa (ECA) and the African Union, notes that African economies quickly rebounded from the 2008 financial crisis as commodity prices rose and export revenues returned to pre-crisis levels, enabling them to finance the necessary investments.

Turmoil in North Africa and the euro area crisis combined to slow growth in 2011, but despite uncertainties some African countries have grown at double digits, reflecting higher commodity prices and strong domestic demand, it adds.

Entitled “Unleashing Africa’s Potential as a Pole of Global Growth,” the report states that Africa’s governments need to push through growth-promoting macroeconomic policies in the short run, while adopting long-term development strategies. Specifically, they should increase investments in high-quality education, health and infrastructure that can enhance long-term growth potential.

“In the long-term, African countries must vigorously pursue economic diversification and structural transformation to moderate negative external shocks from the euro debt crisis or volatility in commodity prices (or both) and provide decent jobs for African men and women,” states the report.

In addition, they should intensify efforts to diversify their export destinations, expand economic partnerships, including those with emerging economies, and deepen intra-Africa trade and investment. Crucially, though, Africa can grow faster and become “a global growth pole” by unleashing its productive potential through aggressively investing in infrastructure and human capital, says the report.

At the same time, the UN Conference on Trade and Development (UNCTAD) is calling for Africa to adopt a “sustainable structural transformation,” so as to achieve much-needed growth while protecting the environment.

“The challenge is to modernize the continent’s economies – including expanding industrial capacity – through the efficient use and consumption of domestic natural resources, thereby avoiding the mistakes made by early industrializers elsewhere,” the agency said in a news release on its Economic Development in Africa Report 2012, also released today.

The report contends that Africa should not follow the same “grow now, clean up later” approach that was adopted by currently industrialized countries. It urges African governments to shift from traditional to modern, less-polluting energy sources, by increasingly powering their economies by renewable energy such as wind, solar and hydro power, as well as expand the use of organic agriculture.

For Africa to successfully transform its economies in a sustainable way, it will need to build capacities to obtain, use and adapt existing environmentally sound technologies to local conditions, the report adds.

♦ Receive daily updates directly in your inbox - Subscribe here to a topic.
♦ Download the UN News app for your iOS or Android devices.
Africa|economic growth 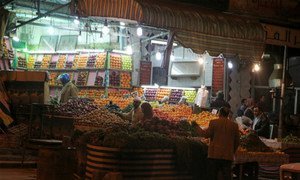 With Africa potentially on the eve of an economic renewal, a senior United Nations official today called on the international community to grant the continent fairer access to markets for its exports and invest in its lucrative resources by funding the necessary infrastructure.