It is vital to put an end to the armed mutiny that began in April in the eastern Democratic Republic of the Congo (DRC) which has led to a worsening of the security situation and a major displacement of civilians, a senior United Nations official told the Security Council today.

The mutiny “now threatens a general destabilization of the Kivus and region, and dramatically increases the general threat to millions of civilians,” said the Secretary-General’s Special Representative and head of the UN peacekeeping mission in DRC (MONUSCO), Roger Meece.

“It is important to put an end to the mutiny as soon as possible for multiple reasons,” he added, noting that it would permit the return home of large numbers of displaced civilians, a timely resumption of coordinated efforts targeting armed groups in area, and the resumption of stabilization and economic development programmes.

The fighting between government troops and renegade fighters in North and South Kivu provinces, following the mutiny by soldiers led by Bosco Ntaganda and Sultani Makenga, has left more than 100,000 people displaced, including those who have fled to Rwanda and Uganda, according to the Office of the UN High Commissioner for Refugees (UNHCR).

In his briefing to the Council, Mr. Meece said that MONUSCO has credible information regarding killings on a significant scale and other serious crimes committed in the Kivus, including rape and other forms of sexual violence. The fighting has also greatly limited humanitarian access through the region.

The UN mission has deployed peacekeepers and stepped up operations throughout the affected area, he said, noting that, “Our resources, however, have been stretched to the limits attempting to cover developing hot spots, and the overall situation in North Kivu has been deteriorating.”

The envoy added that MONUSCO has no means of verifying allegations of support being provided to the mutinous forces from across the Rwandan border. At the same time, he stated, it is important to put an end to any or all external support the mutinous forces may receive.

“The people of eastern Congo have already suffered too much and for too long, and any actions that prolong violence and armed conflict in the region must stop,” Mr. Meece said.

The Special Representative also reported that the activities of the Ugandan rebel Lord’s Resistance Army (LRA) continue to represent a threat not only to north-eastern DRC but other countries in the region as well. “The brutal LRA actions continue to provoke enormous fear throughout the region where they operate,” he said.

Mr. Meece added that while it is important to recover from the security setbacks as soon as possible in the Kivus, it is also vital to move forward on a broader agenda aimed at addressing the key underlying causes of conflict in eastern DRC and ensuring much-needed durable security and development throughout the country. 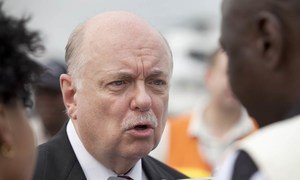