French President Francois Hollande today spoke of the need for urgent action on sustainable development issues ahead of a major United Nations conference in Brazil later this month.

“We need actions, not for tomorrow, but for today,” Mr. Hollande said in his keynote speech to the more than 1,000 civil society and private sector representatives gathered in Paris for three days of events linked to the UN Conference on Sustainable Development (Rio+20), which takes place in Rio de Janeiro, Brazil, from 20 to 22 June.

The events were organized by Comité 21, an umbrella organization for civil society and municipal actors, in partnership with the UN Regional Information Centre in Brussels (UNRIC).

More than 100 heads of State and government, along with thousands of parliamentarians, mayors, UN officials, Chief Executive Officers and civil society leaders are expected to attend, to shape new policies to promote prosperity, reduce poverty and advance social equity and environmental protection.

In his remarks, Mr. Hollande spoke of France’s “active” engagement in the Rio+20 process, and reiterated his call for the creation of a so-called World Environment Organisation, which he said would contribute to the success of Rio+20. “An agency like the World Trade Organisation or the International Labour Organisation,” he said.

The French President also noted that the political negotiations on the outcome document “will not be easy.”

“There are risks, the risk of division, even of failure, the risk of empty words,” Mr. Hollande said, adding that “Rio is not about preventive measures, the world needs a new development model with economic and social dimensions.”

Negotiators concluded the last round of Rio+20 preparatory talks – focussed on the gathering’s outcome document – in New York last Saturday, and they have now reached agreement on more than 20 per cent of the document, with many additional paragraphs close to agreement.

Following the latest round of negotiations in New York, the next and final preparatory talks will be held in Rio de Janeiro from 13 to 15 June, just ahead of the Conference.

Earlier this week, Secretary-General Ban Ki-moon said that there is still much work ahead, but foundations are in place for agreement on the remainder of the negotiating text that is expected to become the outcome of the conference.

“I expect the negotiators to accomplish this in the days before ministers and world leaders arrive in Rio. Leaders will then act to resolve all outstanding issues,” he said in a press conference on Wednesday. “Their job is to achieve renewed political commitment for sustainable development. We aspire to nothing less than a global movement for generational change.” 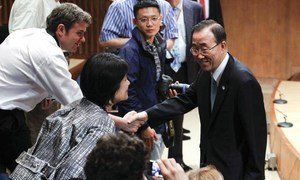 With just two weeks until the start of a major United Nations sustainable development conference, Secretary-General Ban Ki-moon today urged countries to step up efforts to achieve concrete decisions to reduce poverty while promoting decent jobs, clean energy and more sustainable and fair use of resources.