The President of the General Assembly, Nassir Abdulaziz Al-Nasser, today expressed his disappointment over the lack of progress in ending the violence in Syria.

“To tell you frankly, I’m very disappointed,” Mr. Al-Nasser said in an interview. “The UN, the General Assembly, [and] the Security Council try very hard to convince the Syrian Government to stop the violence and start listening to their own people and reach out to them and try to come up with a plan.”

Mr. Al-Nasser noted that the General Assembly endorsed, in February, a resolution establishing Kofi Annan as the Joint Special Envoy of the United Nations and the Arab League for the Syrian Crisis. In March, Mr. Annan put forward a six-point plan to help bring peace to the Middle Eastern country.

“The Syrians accepted it [the six-point plan], but on the other hand we don’t see any implementation except for more bloodshed, more violence, and last week we listened to Mr. Annan, and he is also disappointed,” Mr. Al-Nasser said.

On Thursday, Mr. Annan will brief the General Assembly in person, followed by the Security Council and the media, on the latest developments in Syria. Mr. Al-Nasser will also address the Assembly meeting, as will Secretary-General Ban Ki-moon and the Secretary-General of the Arab League, Nabil Al Araby.

“We will see how can we come up together and find a new approach to help the Syrian people,” the GA President said. “We see and hear more killing and that is not acceptable.” 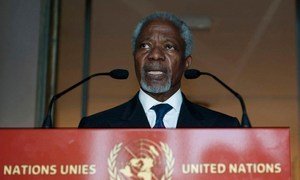