The top United Nations official for Somalia today called for greater investment in the Horn of Africa nation, as international partners gathered to renew their commitment to the country's recovery and development and to support the ongoing political transition.

“A paradigm shift in international assistance will allow partners of Somalia build the resilience of Somali households, communities and local institutions against crises in the medium and long-term,” he added. “This will take real partnerships, strategic vision and integrated multi-sectoral approaches and reliable multi-year funding.”

Known as Istanbul II, the two-day conference brings together the private sector, donors, Somali authorities, the UN and civil society to focus on the country's recovery and development as well as support for its political transition.

After decades of warfare, Somalia has been undergoing a peace and national reconciliation process, with the country's Transitional Federal Institutions currently implementing a roadmap, devised in September last year, that spells out priority measures to be carried out before the current transitional governing arrangements end on 20 August.

The conference features four partnership forums that will set priorities for resilience, energy, water and roads.

“To move onto a new development trajectory, we need to invest in Somalia's considerable potential in both productive and service sectors,” Mr. Mahiga said.

He added that expanding access to cheaper and sustainable energy is a top priority for Somalia and its partners, as improved access to affordable energy will lift the constraints on economic growth and allow the Somali private sector to expand and flourish.

Efficient use of scarce water is essential for the well-being and economic development of the population, he continued, while investment in the right roads can deliver employment, enable equitable development and bolster the much needed investment in resilience.

“Across all the four themes, good governance principles to promote a business-conducive environment should be applied by the authorities, the development partners and the private sector,” said the envoy. “Transparency and accountability by all stakeholders will help build the confidence that large-scale investments will translate quickly to improvements in the lives of ordinary Somalis.” 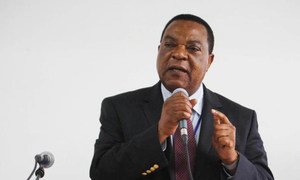 Leaders in Somalia have agreed to set up a Constituent Assembly that will adopt the East African nation’s new constitution in line with an existing roadmap to end the current transitional governing arrangement by an upcoming deadline, the United Nations envoy for the country said today.