At Alliance of Civilizations meeting, Ban calls for tolerance and cooperation

Secretary-General Ban Ki-moon today stressed the need for tolerance and cooperation amidst the global economic crisis and the political transitions taking place in several Arab countries, and called on countries to strengthen their partnerships and engage in dialogue.

“This is an era of great transitions, and by their very definition, transitions bring forth tensions and expose hidden fault lines,” Mr. Ban said in his remarks at the Partners Forum of the UN Alliance of Civilizations, taking place in Istanbul, Turkey.

Launched in 2005 through the initiative of Spain and Turkey, under the auspices of the UN, the Alliance seeks to promote better cross-cultural relations worldwide. The forum, which is being convened by Turkish Prime Minister Recep Tayyip Erdogan, seeks to broaden public and private support for the initiative.

In his speech, the UN chief emphasized that the need for unity in the international community is particularly urgent in Syria, which has seen renewed violence over the past week resulting in the deaths of more than 100 civilians, including children.

“In these difficult times, in the face of humankind's terrible capacity for inhumanity, it is all the more important for those of us here today to take a clear and principled stand,” he said. “To speak out, and more, to act in the cause of peace, tolerance and harmony among people.”

Mr. Ban underlined that the UN Supervision Mission in Syria (UNSMIS) – made up of close to 300 unarmed military observers on the ground, as well as civilian staff – represents the eyes and ears of the international community, while at the same time it is helping to bring about a ceasefire.

“The more the international community knows, the more likely it is that we can advance on our most important goal: to help find a political solution, a solution that safeguards the lives and interests of all the Syrian people,” he said.

“Let me state plainly, however: the UN did not deploy in Syria just to bear witness to the slaughter of innocents. We are not there to play the role of passive observer to unspeakable atrocities,” he added, warning that the massacre of civilians such as the one which took place in Houla last weekend could plunge the country into a “catastrophic civil war,” and called on the international community to remain united in demanding that the Syrian Government act on its responsibilities to its people.

The Secretary-General also emphasized that, at a time of growing unemployment, members of the Alliance of Civilizations must work together to be able to deliver results to their citizens.

“This is a time of budget difficulties. There is growing competition for scarce financial resources,” Mr. Ban said. “Our ultimate test is not how we talk of noble aspirations but how we deliver to the people who need our support.”

In his remarks to the gathering, the President of the General Assembly, Abdulaziz Al-Nasser, said the Alliance today has a “more daunting task than ever before” in dealing with intolerance, xenophobia and incitement, and stressed that it must be strengthened so it can effectively diffuse tensions, prevent misunderstandings and build networks for peace.

President Al-Nasser has previously called for the strengthening of the role of the Alliance as a global tool to mediate international disputes and promote cultural understanding and tolerance.

♦ Receive daily updates directly in your inbox - Subscribe here to a topic.
♦ Download the UN News app for your iOS or Android devices.
alliance|civilizations 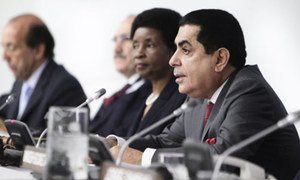 The President of the General Assembly, Nassir Abdulaziz Al-Nasser, today called for the strengthening of the role of the Alliance of Civilizations as a global tool to mediate international disputes and promote cultural understanding and tolerance.