The SCSL's Trial Chamber unanimously imposed the single global sentence for all 11 counts of the crimes for which Mr. Taylor was found guilty of in April. These included acts of terrorism, murder, rape, sexual slavery, outrages upon personal dignity, cruel treatment, conscripting or enlisting of child soldiers, enslavement and pillage, related to the civil war in Sierra Leone in the 1990s.

The Trial Chamber found that Mr. Taylor's abuse of his position as President of Liberia to aid and abet the commission of crimes in Sierra Leone, and the abuse of his position as a member of the Economic Community of West African States' Committee of Five (later Six), which was “part of the process relied on by the international community to bring peace to Sierra Leone,” was “an aggravating factor of great weight.”

The Trial Chamber's judges also cited the extra-territoriality of Mr. Taylor's acts, and his exploitation of the Sierra Leone conflict for financial gain, as aggravating factors considered in the sentencing. They took into account the report of his good conduct in detention, but otherwise rejected a number of mitigating factors proposed by his defence lawyers.

While the jurisprudence of the SCSL and other tribunals “holds that aiding and abetting as a mode of liability generally warrants a lesser sentence than that imposed for more direct forms of participation,” the presiding judge, Justice Richard Lussick of Samoa, said in a news release, that Mr. Taylor's leadership role “puts him in a class of his own.”

At an earlier hearing, Mr. Taylor had told the SCSL that he was saddened by the atrocities and crimes committed in Sierra Leone, but denied that he aided the rebels who committed the abuses. He had asked that “reconciliation and healing and not retribution should be the guiding principles in your honours' task” in determining his sentence.

Any intention to appeal the Trial Chamber's decision must be submitted in writing to the SCSL's Appeals Chamber within 14 days of today's sentencing judgement, setting forth the grounds of appeal.

The SCSL is an independent tribunal set up jointly by the Government of Sierra Leone and the UN. It is mandated to try those who bear the greatest responsibility for serious violations of international humanitarian law and Sierra Leonean law committed in the country since 30 November 1996. 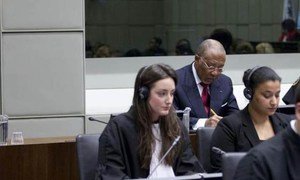 Convicted former Liberian President Charles Taylor told the United Nations-backed Special Court for Sierra Leone (SCSL) today that he was saddened by the atrocities and crimes committed in Sierra Leone, but denied that he aided the rebels who committed the abuses.