24 May 2012
The head of the United Nations agency tasked with defending press freedom today spoke out against the killing of two journalists, one in Honduras and the other in Uganda.

Alfredo Villatoro, a radio journalist, was found dead on the outskirts of Tegucigalpa, Honduras, on May 15; while Amon Thembo Wa’Mupaghasya, an independent TV director in Kasese, Uganda, was shot dead on 12 May.

“News of the murder of Alfredo Villatoro – less than one week after the assassination of fellow journalist Erick Martinez Villa – is deeply alarming and reflects the dangerous conditions faced by Honduran reporters,” said the Director-General of the UN Educational, Scientific and Cultural Organization (UNESCO), Irina Bokova, in a news release. “Mr. Villatoro’s death undermines the right of the people of Honduras to be informed. Every attempt must be made to bring his killers to justice.”

Mr. Villatoro, a presenter at the HRN radio station, had repeatedly received death threats prior to his abduction on 9 May. Less than a week later, his body was found outside the capital.

According to UNESCO, Mr. Villatoro was the third Honduran journalist to be murdered within the span of a few weeks. Since 2009, a total of 20 journalists and media workers have been killed in Honduras – which UNESCO has described as among the most dangerous countries in the hemisphere for journalists, alongside Mexico and Colombia.

In relation to the killing of Mr. Thembo Wa’Mupaghasya, Director-General Bokova called for an investigation, in addition to condemning it.

“This crime is an intolerable attack on freedom of expression, a fundamental human right which forms the cornerstone of democracy,” she said. “The liberty to investigate and report important issues sustains social debate. Journalists must be able to work without fear of reprisal.”

Mr. Thembo Wa’Mupaghasya, who lived near Uganda’s border with the Democratic Republic of the Congo, was gunned down by unidentified assailants who also stole his bag and camera. According to UNESCO, local authorities are reported to have launched an investigation into the case and are examining the possibility that the TV director was targeted for his work, with local media having reported that he had been the victim of unidentified attackers in the past, and that he had received numerous threats against his life.

Mr. Thembo Wa’Mupaghasya’s is the third journalist to be murdered in Uganda as of 2010. 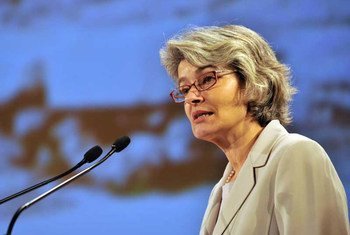