21 May 2012
Colombia must increase its efforts to fight impunity for crimes of sexual violence, a United Nations envoy said today, adding that such efforts should be paired with assistance to survivors and victims.

“I understand that the country as a whole wants to look to the future, instead of dwelling on the past, but there can be no lasting peace without security and peace for women,” the Secretary-General’s Special Representative on Sexual Violence in Conflict, Margot Wallström, said in a statement at the end of a four-day visit – her first – to the South American country.

“More needs to be done to support these survivors, both in terms of access to justice, assistance and to help them reintegrate into society. Additional resources are required to strengthen the capacity of the judicial system in order to address the issue of sexual violence,” she added.

During her visit, Ms. Wallström met with survivors of sexual violence, representatives of victims associations and Government officials, as well as with the ombudsman and the Inspectors-General of the army and the police.

In addition, she travelled to the city of Villavicencio to visit a site for internally displaced persons and learn about the Government’s reintegration programme for ex-combatants. She also heard testimonies from survivors of sexual violence and met with ex-combatants of the National Liberation Army, the Revolutionary Armed Forces of Colombia (FARC) and paramilitary forces.

Ms. Wallström welcomed the Government’s resolve to fight impunity for sexual violence crimes perpetrated in the context of conflict.

“Impunity must never be an option,” she said. “I welcome the Vice President’s commitment to a framework for strengthened cooperation between the Government and the UN, for putting survivors and victims of sexual violence at the centre of our efforts to assist them, and to work together in an effort to increase the sharing of information and best practices.”

The Special Representative added that she would continue to monitor the situation and engage with the Government, the UN Country Team, civil society in Colombia and the international community on this issue.

“Justice in Colombia has been delayed for so many, but it must not be denied,” she said. 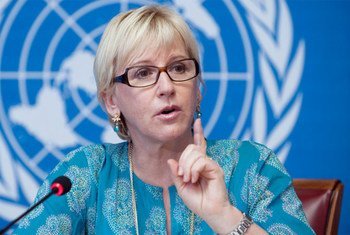 3 May 2012
A top United Nations official has voiced her concern about the latest wave of fighting in eastern Democratic Republic of the Congo (DRC), especially in areas that have previously witnessed sexual violence committed against civilians by members of armed groups.