UN Photo/Violaine Martin
Spokesman Ahmad Fawzi (left) with Joint Special Envoy of the UN and the League of Arab States on the Syrian Crisis, Kofi Annan.

15 May 2012
Three vehicles belonging to a convoy of UN observers in Syria were damaged in a bomb blast near the city of Hama today, according to a UN spokesperson.

The three vehicles were part of a four-vehicle convoy of the UN Supervision Mission in Syria (UNSMIS), which was in Khan Cheikhoun, when an improvised explosive device was detonated around mid-afternoon local time, Ahmad Fawzi, the spokesperson for the Joint Special Envoy for the UN and the League of Arab States for the Syrian crisis, Kofi Annan, told reporters in Geneva today.

“Three UN vehicles were damaged, no UN personnel were injured,” Mr. Fawzi said in response to questions. “The Mission has sent a patrol team to the area to extract the UN military observers.”

The crisis in Syria, which began in March 2011 as a protest movement similar to those across the Middle East and North Africa, has claimed over 9,000 lives, mostly civilians, and displaced tens of thousands.

Separately, the Spokesperson’s Office in New York today said that UNSMIS had reported that heavy fighting took place on Monday in Tal Biseh and Rastan, and UN observers witnessed that a highway in the area had been blocked by Government forces. It added that an UNSMIS patrol helped to de-escalate the situation and get the highway opened after interaction with Government Forces.

On Wednesday last week, a bomb blast went off in the vicinity of a convoy of UNSMIS observers, which had been approaching the southern city of Dar’a. The blast injured several Syrian soldiers accompanying the delegation.

Authorized by the Council last month under resolution 2043, UNSMIS is tasked with monitoring the cessation of violence in Syria and supporting the full implementation of Mr. Annan’s six-point plan. 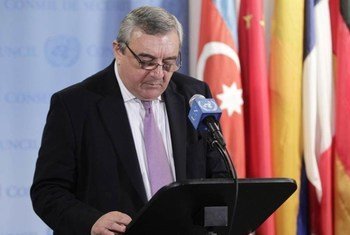 10 May 2012
Secretary-General Ban Ki-moon and the United Nations Security Council have strongly condemned deadly bomb attacks in Damascus today, and called for an end to the ongoing violence in the Middle Eastern country.