UN Photo/V. Martin
Kofi Annan, Joint Special Envoy of the UN and the Arab League, briefs reporters in Geneva.
8 May 2012

Amid concerns from the international community over the prospects of a “full civil war” in Syria, the Joint Special Envoy of the United Nations and the League of Arab States on the Syrian Crisis, Kofi Annan, said today that the ongoing levels of violence and human rights abuses in the Middle Eastern country are unacceptable and the UN observer mission is possibly the only remaining chance to stabilize it.

Mr. Annan told reporters in Geneva that there has been some decrease in the military activities but there are still serious violations in the cessation of violence that was agreed.

“The levels of violence and abuses are unacceptable,” he stated, following a briefing to the Security Council in New York, via video-link, on the status of the implementation of his six-point plan to end the crisis in Syria.

The crisis, which began in March 2011 as a protest movement similar to those across the Middle East and North Africa, has claimed over 9,000 lives, mostly civilians, and displaced tens of thousands. Mr. Annan’s plan calls for an end to violence, access for humanitarian agencies to provide relief to those in need, the release of detainees, the start of inclusive political dialogue that takes into account the aspirations of the Syrian people, and unrestricted access to the country for the international media.

“Government troops and armour are still present, though in smaller formations,” Mr. Annan said. “There have been worrying episodes of violence by the Government but we have also seen attacks against government forces, troops and installations. And there has been a spate of bombings, which are really worrying, and I’m sure creates incredible insecurity among the civilian population.”

He added that it is clear that the presence of the observers serving with the UN Supervision Mission in Syria (UNSMIS) has had a calming effect in some situations.

UNSMIS, authorized by the Council last month, is made up of up to 300 unarmed military observers and deployed for an initial period of 90 days. It is tasked with monitoring the cessation of violence in Syria and supporting the full implementation of the six-point plan.

“I believe that the UN Supervision Mission is possibly the only remaining chance to stabilize the country,” stated Mr. Annan. “There is a profound concern that the country could otherwise descend into full civil war and the implications of that are quite frightening. We cannot allow that to happen.

“I hope that both the Government and all components of the opposition understand this and seize this fragile, but real, opportunity to bring the situation under control,” he added. “The violence must stop and a credible political process must begin for the sake of the Syrian people.”

The Council also heard a briefing behind closed doors from the Under-Secretary-General for Peacekeeping Operations, Hervé Ladsous, who provided an update about the deployment of UNSMIS. It is estimated that all 300 observers will be on the ground by the end of this month.

Ahead of his briefing to the Council, the Joint Special Envoy met with the General Assembly’s President Nassir Abdulaziz Al-Nasser, with whom he discussed the implementation of the six-point plan. Mr. Al-Nasser stressed the urgent need to make progress on the issues, based on the resolutions of the Assembly and the Security Council, according to information released by the President’s spokesperson.

Mr. Al-Nasser also stressed the need for the Syrian authorities and other parties to cooperate fully with Mr. Annan and his team for the full implementation of the relevant resolutions to resolve the crisis and help all Syrians restore peace, stability and unity to the country. 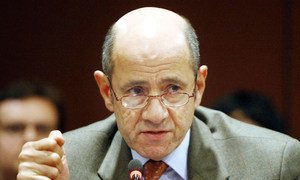 The six-point plan drawn up by the Joint Special Envoy of the United Nations and the League of Arab States, Kofi Annan, to resolve the violent crisis in Syria is proceeding ahead, his spokesperson said today, adding that there are “small signs” of compliance with the plan.