7 May 2012
The United Nations is determined to do everything possible to assist societies torn by war from sliding back into conflict, Secretary-General Ban Ki-moon told an audience in the United States capital today, adding that while there have been setbacks, peacebuilding remains a crucial element of the world body's efforts.

In a speech to the Center for Strategic and International Studies in Washington, D. C., Mr. Ban highlighted the work of the UN's 16 peacekeeping operations and 15 political missions in the area of peacebuilding – a core mandate of the Organization.

“Our record of achievement in nurturing recovery from conflict is long,” Mr. Ban said. “Of course, there have been setbacks. But the bottom-line is clear: the UN is there where we are most needed. And just as clearly, our engagement has helped many societies make a new start.”

He stressed that peacebuilding saves lives, protects human rights and promotes the rule of law, adding that it also saves money, with costs that are a fraction of military operations, and of the economic damage caused by of conflict.

“So it is quite natural that peacebuilding is taking on a greater profile in the work of the United Nations for peace,” he said.

The UN chief noted that while violent conflict has declined significantly in the past two decades, one and a half billion people still live in fragile or conflict-affected countries.

“For them, the world does not feel safer. For them, insecurity, injustice and inequality define their days,” he said. “We see rebels, gangs and organized crime syndicates undermining and overwhelming the institutions of state. We see violence driven by political exclusion, conflict over natural resources, a lack of jobs, grievances over corruption, and human rights abuses.”

Over the past 20 years, too many countries that thought they had put an end to violent conflict, saw it erupt again, said the Secretary-General, adding that their political institutions were not yet effective enough to resolve differences peacefully.

“Our goal is to focus not only on negative peace – the absence of violence – but also on the foundations of long-term stability – positive peace,” said Mr. Ban. “We aim to give confidence to the people... and political support over the long-term, especially when the media and others shift their attention to other crises.”

He said the UN's experience has brought many lessons, including that there is no fixed sequencing among preventive diplomacy, peacebuilding and peacekeeping, and that peacebuilding is a task for many actors.

Other lessons are that national ownership and leadership are critical, as witnessed in peacebuilding success stories such as Timor-Leste; that even certain staples of post-conflict activity can go wrong; that peacebuilding needs to be incorporated more fully into development cooperation; and, that it is crucial that resources can be provided quickly in response to fleeting windows of opportunity.

“The inclusion of women in peace processes and post-conflict planning is fundamental for their legitimacy – and for the results to take hold,” Mr. Ban added.

He stated that the UN is the only organization that can bring all the necessary elements of peacebuilding to bear: political, security, human rights, humanitarian, rule of law and development. At the same time, he noted that peacebuilding is a work in progress.

“We are learning by doing. It is rarely linear. It requires great flexibility, and approaches tailored to a given situation,” he said. “The violence within us, and within our societies, and among countries, is not going to vanish any time soon. But we are firmly committed to countering it at every turn, with every tool. We are determined to do everything we can to seize the post-conflict moment, and help societies find a safer, more prosperous path.”

While in Washington, the Secretary-General also spoke at an event at the American Society of International Law, focusing on the importance of the rule of law in today's world, especially the responsibility to protect and efforts to move to an “age of accountability.”

“Accountability lies first with States,” he stated. “But if States are unwilling or unable to investigate and prosecute atrocity crimes, the world must step in. Governments may blatantly disregard their responsibilities – but the international community will not.”

He noted that the International Criminal Court (ICC) is at the heart of global efforts to end impunity. “The Court is our chance and our means to advance justice, reduce suffering and prevent international crimes,” he added.

Mr. Ban will also meet with US Deputy Secretary of State William Burns, and, in the evening, attend a reception and awards dinner at the Atlantic Council. In his speech at the evening event, he is expected to talk about international engagement and support for nations in transition, including Syria.

Killers of Somali journalist must be brought to justice – UNESCO chief 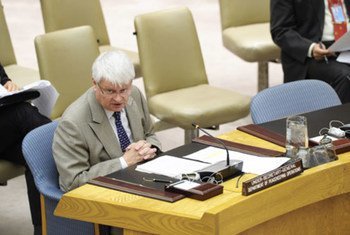