4 May 2012
The United States needs to adopt more robust measures to address the issues affecting its indigenous peoples, an independent United Nations expert said today, stressing that such policies must be developed in partnership with Native American, Alaskan Native and Hawaiian peoples in the country.

“Continued and concerted measures are needed to develop new initiatives and reform existing ones, in consultation and in real partnership with indigenous peoples, with a goal towards strengthening their own self-determination and decision-making over their affairs at all levels,” said the Special Rapporteur on the rights of indigenous peoples, James Anaya, at the end of his first visit to the country, which finished today.

“Securing the rights of indigenous peoples to their lands is of central importance to indigenous peoples’ socio-economic development, self-determination, and cultural integrity,” Mr. Anaya said, underscoring that continued efforts should be made to resolve, clarify, and strengthen the protection of indigenous lands, resources, and sacred sites.

Mr. Anaya drew special attention to the need for measures of reconciliation to overcome “the legacies of a history of oppression” in the country, according to a news release issued by the UN human rights office.

“In all my consultations with indigenous peoples in the places I visited it was impressed upon me that the sense of loss, alienation and indignity is pervasive throughout Indian country,” he said.

“I heard almost universal calls from indigenous nations and tribes across the country that the Government respect tribal sovereignty, that indigenous peoples’ ability to control their own affairs be strengthened, and that the many existing barriers to the effective exercise of self-determination be removed,” Mr. Anaya added.

During his 12-day visit, Mr. Anaya met with indigenous peoples in the capital, Washington D.C., as well as in the states of Arizona, Alaska, Oregon, Washington, South Dakota and Oklahoma, in addition to government officials.

He said that during his mission he learned that many tribes across the country already have capable institutions of self-governance and tribal courts in place, as well as self-administered social and economic development programmes that have had significant successes and which also help to promote and consolidate indigenous cultures and values.

The expert noted that he had collected enough information to assess how the standards of the UN Declaration on the Rights of Indigenous Peoples are reflected in US law, policy and programmes at both the state and federal levels, and to identify needed reforms.

Adopted in 2007, the UN Declaration on the Rights of Indigenous Peoples establishes a universal framework of minimum standards for the survival, dignity, well-being, and rights of indigenous peoples around the world. The US endorsed the Declaration in December 2010.

Independent experts, or special rapporteurs, are appointed by the Geneva-based Human Rights Council to examine and report back on a country situation or a specific human rights theme. They work in an independent and unpaid capacity. 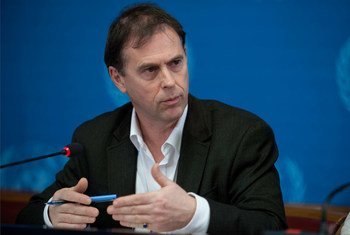 27 April 2012
The United Nations human rights office today welcomed a new law in the state of Connecticut, in the United States, that abolishes the death penalty and urged other states to follow suit.