26 April 2012
The United Nations today highlighted the importance of investing in initiatives that seek to tackle overfishing and protect marine biodiversity, as well as inform consumers of the benefits of buying sustainable fish products.

“Fisheries are a major piece of the global economy and a major source of jobs for people both in the developed and the developing world,” said the head of the Water & Ocean Governance Programme of the UN Development Programme (UNDP), Andrew Hudson, during a press conference at UN Headquarters in New York on the impact of overfishing. “Fish are a major piece in the global environment and we have to pay close attention to this issue if we want to maintain healthy and productive oceans going forward.”

According to UN estimates, approximately 85 per cent of the world’s fish stocks are overexploited, depleted, or recovering from depletion; and the world economy can gain up to $50 billion every year by restoring fish stocks and reducing fishing capacity to an optimal level.

Some private companies are already addressing the challenge of investing in sustainable fishing practices. Whole Foods Market, the United States retailer, recently announced that it will no longer carry wild seafood that has been ‘red rated’ – meaning that the fishery it came from may be involved in overfishing or that other marine life may have been hurt in the process. Instead, it will only carry wild seafood from fisheries certified sustainable by the Marine Stewardship Council.

Speaking at the press conference, the company’s Seafood Quality Standards Coordinator, Carrie Brownstein, emphasized that it is making its ratings information available to the public in an effort to raise awareness of fishing practices among consumers.

“We want to be completely transparent about our sourcing policies so that we can build consumer trust,” Ms. Brownstein said. “We are hoping that our rating system can also help other companies develop their own sustainability policies.”

Ray Menell, a local fisherman from New Jersey who was also took part in the press encounter, said that fishing practices in recent years have severely hurt many species. He stressed that policies like the ones adopted by Whole Foods should serve as an incentive for fisheries to eventually move towards more sustainable practices.

“There are global implications in the policies we adopt and the businesses we work with and that’s what people need to realize when they make decisions about what they buy,” Ms. Brownstein later told the UN News Centre in an interview, adding that since the company made their rating systems available to the public, consumers have increasingly bought green-rated products. 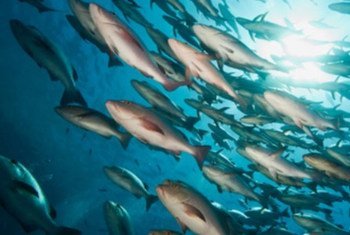 25 January 2012
The economic productivity of the marine sector can be significantly boosted by shifting to a more sustainable approach that focuses on green activities such as renewable energy, eco-tourism and sustainable transport, according to a United Nations report released today.