“This is a historic and momentous day for the people of Sierra Leone, for the region and beyond. The Secretary-General’s thoughts today are with the victims of the crimes for which Charles Taylor has been found guilty,” said a spokesperson for Secretary-General Ban Ki-moon.

“The judgment is a significant milestone for international criminal justice, as it concerns the first ever conviction of a former Head of State by an international criminal tribunal for planning, aiding and abetting war crimes and crimes against humanity,” he added. “It sends a strong signal to all leaders that they are and will be held accountable for their actions.”

Earlier on Thursday, the SCSL handed down a guilty verdict against Mr. Taylor for planning, aiding and abetting war crimes and crimes against humanity. He was on trial on 11 charges of war crimes and crimes against humanity, including pillage, slavery for forced marriage purposes, collective punishment and the recruitment and use of child soldiers.

Mr. Taylor, who was indicted while he was still President of Liberia, is the first former Head of State to be convicted by an international criminal tribunal since the Nuremberg trials in 1946. The charges relate to his alleged support for two rebel groups – the Armed Forces Revolutionary Council and the Revolutionary United Front – during Sierra Leone’s decade-long civil war. He had pleaded not guilty to all charges.

The UN chief’s views were echoed around other parts of the United Nations system.

“It is important to recognise that Taylor may appeal the verdict, and that his guilt is not fully established until the end of the judicial process,” the UN High Commissioner for Human Rights, Navi Pillay, said in a news release. “Nevertheless, whatever the final outcome, this is undoubtedly a historic moment in the development of international justice.”

The High Commissioner noted that other leaders – namely Laurent Gbagbo and Radovan Karadžic – have also been charged with international crimes and are either already on trial or will be soon. As well, President Omar al-Bashir of Sudan has been indicted, while Slobodan Miloševic and Muammar Qadhafi were also at various stages of international proceedings at the time of their deaths.

“The days when tyrants and mass murderers could, even when they had been deposed, retire to a life of luxury in another land are over,” Pillay said. “And so they should be. Few things are more repugnant than seeing people with so much blood on their hands, living on stolen money with no prospect of their victims seeing justice carried out.”

The Court’s conviction of Mr. Taylor included his involvement in the conscription, enlistment or use of children under the age of 15 years in hostilities. The Secretary-General’s Special Representative for Children and Armed Conflict, Radhika Coomaraswamy, said the court’s decision was a groundbreaking achievement in prosecuting those who commit or are responsible for the most horrendous crimes against children.

“In this decade long conflict, children have experienced unspeakable atrocities. Girls and boys have been forced to cut off people’s limbs or have been mutilated themselves,” Ms. Coomaraswamy said in a news release. “I am encouraged by the prosecution of the mastermind behind these crimes and hope that with justice done today comes recovery and healing for the victims.”

She noted that the SCSL has been at the forefront of the fight against impunity for violations against children – it was the first international court to decide that the recruitment and use of children under fifteen constitutes a war crime under customary international law. The Court also took a clear decision not to prosecute child soldiers, but to bring to justice those who bear the greatest responsibility: political leaders and military commanders.

Noting that three of the 11 counts in the indictment against Mr. Taylor pertain to sexual violence, the Secretary-General’s Special Representative on Sexual Violence in Conflict, Margot Wallström, said the court’s decision sends a powerful signal that sexual violence will be punished.

“Wartime sexual violence used to be one of history’s greatest silences and the world’s least condemned war crime. The trial of Charles Taylor, former President of Liberia, represents a firm commitment by the international community that impunity is not an option for this type of crime,” Ms. Wallström said in news release. “The successful prosecution of a former President signals that no leader – however powerful – is above the law; and that no woman or girl is below it.”

The Prosecutor of the SCSL, Brenda J. Hollis, applauded the conviction, lauding it as another victory in the fight against impunity.

“Today is for the people of Sierra Leone who suffered horribly because of Charles Taylor. This judgment brings some measure of justice to the many thousands of victims who paid a terrible price for Mr. Taylor’s crimes,” Ms. Hollis said.

According to the SCSL, following today’s judgment both parties will make submissions on sentencing, which is expected to be pronounced in the near future. The final stage in the case will be the appeals phase. The Prosecution will closely review today’s judgment to identify any potential appellate issues.

The Secretary-General’s spokesperson noted that the SCSL is an excellent model of a cooperative partnership with the United Nations to bring those responsible for serious international crimes to justice in accordance with international standards of justice, fairness and due process of law.

The SCSL was set up jointly by the Sierra Leonean Government and the UN in 2002, with the mandate of trying those who bear the greatest responsibility for serious violations of international humanitarian law and national law committed on Sierra Leonean territory since the end of November 1996.

The Taylor trial opened on 4 June 2007 in The Hague. It was adjourned immediately after the prosecution’s opening statement when Mr. Taylor dismissed his defence team and requested new representation. Witness testimony commenced on 7 January 2008, and ended on 12 November 2010. Closing arguments took place in February and March 2011.

Although the SCSL is headquartered in Freetown, the capital of Sierra Leone, Mr. Taylor’s trial took place in a chamber of the Court sitting in The Hague for security reasons. 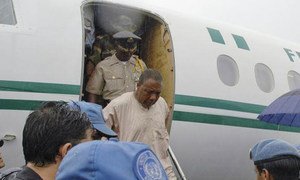 The United Nations-backed court set up to try suspects indicted for war crimes in Sierra Leone announced today that the judgment in the trial of the former Liberian President, Charles Taylor, will be delivered on 26 April.