Following the release last week of two opposition leaders from prison in Belarus, the UN human rights office today called on the country’s authorities to begin dialogue with the opposition and to unconditionally release all prisoners who are serving sentences for exercising their fundamental human rights.

“Many of these individuals have been imprisoned for their involvement in the events of 19 December 2010, when a mainly peaceful opposition rally in downtown Minsk on the evening of the election day was dispersed by police and security forces,” said the spokesperson for the Office of the UN High Commissioner for Human Rights (OHCHR), Rupert Colville, at a press conference in Geneva.

According to OHCHR, around 600 opposition supporters, media workers and human rights defenders had been arrested, including Andrei Sannikau, one of the candidates in the presidential elections, and his aide Dmitri Bandarenka.

More than 40 of these opposition leaders and activists were subsequently sentenced to prison terms. Mr. Sannikau had been sentenced to five years in prison and Mr. Bandarenka to two years, but both were released last week

“We call on the Government of Belarus to unconditionally release all those who remain imprisoned for their peaceful involvement in the events of the 19 December, as well as other human rights defenders, such as Ales Bialiatski, and opposition activists like Syarhey Kavalenka,” Mr. Colville said.

He added that OHCHR also urged the Government to take steps to ensure that human rights defenders and journalists are able to do their work without fear of intimidation or pressure, and that the human rights agency is ready to assist the Government in furthering the enjoyment of the civil and political rights of the people of Belarus. 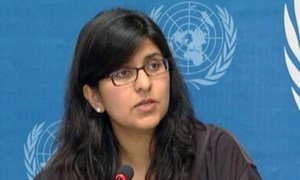 The United Nations today voiced disappointment at the sentencing of a leading human rights defender in Belarus, and called on the authorities to immediately release all political opponents, activists and journalists jailed for exercising their rights.