The United Nations top peacekeeping official had discussions with a senior official of the sub-regional bloc of West African States on issues of mutual interest between the two organizations, including how to better work together, during a visit to the region this week.

The Under Secretary-General for Peacekeeping Operations, Hervé Ladsous, met with the president of the Commission of the Economic Community of West African States (ECOWAS), Kadre Désiré Ouédraogo, in Abidjan, Côte d’Ivoire, yesterday. In addition to strengthening their partnership, discussions touched on the situations in Mali and Guinea-Bissau.

“ECOWAS is a regional organization which is extremely active,” said Mr. Ladsous after the meeting. “It is a partner of the United Nations and the aim of our meeting was to discuss current issues and to see how we can work together.”

Mr. Ladsous also met with representatives of the Front Populaire Ivoirien, the political party of former president Laurent Gbagbo, who is now in the custody of the International Criminal Court facing charges related to bloodshed that followed the contested 2010 presidential election.

The Under-Secretary-General also had discussions with representatives of the Congrès national de la résistance pour la démocratie, a federation of Ivorian parties and civil society groups. 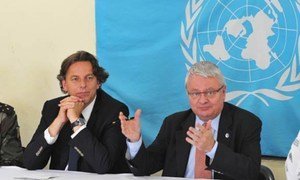 The head of United Nations peacekeeping met today with the Prime Minister of Côte d’Ivoire during a visit to the West African country aimed at familiarizing himself with the remaining security requirements a year after the end of the post-election violence.