More than 180,000 people have been displaced by an ongoing military campaign in north-western Pakistan, the United Nations refugee agency said today, adding that an inter-agency relief operation is under way in support of the country’s efforts to provide relief to those affected.

More than 180,000 people have been displaced by an ongoing military campaign in north-western Pakistan, the United Nations refugee agency said today, adding that an inter-agency relief operation is under way in support of the country’s efforts to provide relief to those affected.

“Significant numbers of new arrivals are approaching UNHCR at the Jalozai camp for the internally displaced, which is located near the city of Peshawar in Khyber Pakhtunkhwa province,” a spokesman for the Office of the UN High Commissioner for Refugees (UNHCR), Adrian Edwards, told reporters in Geneva.

In the Jalozai camp, 72 registration desks have been established to keep pace with the flow of new arrivals, he said, adding that some 10,000 people are being registered daily.

The majority of those registered have chosen not to stay inside the camp, preferring instead to move in with friends and relatives, or to live in rented accommodation. Around 11,000 families, or more than 50,000 individuals, have moved into the Jalozai camp.

The State-run Provincial Disaster Management Authority will soon open two additional registration centres, which will also be used as hubs for distributing humanitarian relief, according to Mr. Edwards.

UNHCR has distributed more than 37,000 humanitarian relief kits, including sleeping mats and jerry cans, while other UN agencies are providing assistance in the areas of mother and child heath, child protection, water and sanitation, primary education, distribution of food rations and vaccinations. More than 4,000 additional tents have been erected in the Jalozai area.

“Systems are also in place to identify and assist those people with particular protection concerns,” said Mr. Edwards. “A grievance and legal desk has been established at the Jalozai registration point to facilitate vulnerable groups who may need additional assistance due to lost registration forms, old national identity cards, or missing identity cards.”

In total, more than 650,000 people are displaced in the Khyber Pakkhtunkhwa province and the Federally Administered Tribal Areas as a result of security operations against militant groups. 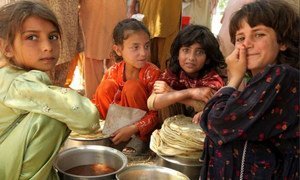 The United Nations refugee agency reported today that more than 100,000 people have become displaced since January by Pakistani military operations against militant groups in the north-western part of the country that borders Afghanistan.