The United Nations High Commissioner for Human Rights, Navi Pillay, today said she was “disturbed” by the recent decision by Suriname to pass an amendment to an existing law that grants immunity for human rights violations committed during the 12-year period in which the country was, for the most part, under military rule.

“The High Commissioner believes this amendment to the law will deny most families of victims their rights to justice, truth and reparation,” said Ms. Pillay’s spokesperson, Rupert Colville, at a press conference in Geneva.

The new law extends the brief period covered by an earlier amnesty law to include any offences that took place between 1 April 1980 and 19 August 1992 “in the context of the defense of the State,” preventing any future investigations on gross human rights violations committed between those dates.

According to the Office of the High Commissioner for Human Rights (OHCHR), one case which involves the former and current President Desi Bouterse may be affected, and could potentially be halted altogether.

Mr. Bouterse, along with 24 other people, is accused of taking part in the arrest of 15 prominent opposition leaders, including journalists, lawyers, and a trade union leader, in December 1982, and their subsequent summary execution.

“The High Commissioner sincerely hopes that steps are taken to reverse this legislation as soon as possible, since it clearly conflicts with Suriname’s international obligations and very much runs against the positive trend in many other Latin American countries of prosecuting and, in many cases convicting, individuals responsible for serious crimes that took place during military dictatorships,” Mr. Colville said.

According to international law, amnesties are not permissible if they prevent the prosecution of individuals who may be criminally responsible for international crimes, including war crimes, crimes against humanity, genocide and gross violations of human rights. 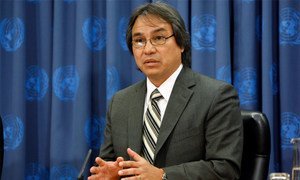