UN Photo/Evan Schneider
Chair of the Committee on the Exercise of the Inalienable Rights of the Palestinian People Abdou Salam Diallo.
4 April 2012

The head of a United Nations committee on Palestinian rights said today that it had heard the indignation of the world concerning the treatment of Palestinian prisoners in Israeli prisons and detention centres.

The chair of the General Assembly’s Committee on the Exercise of the Inalienable Rights of the Palestinian People, Abdou Salam Diallo, said that international law must be respected, noting that the committee had reaffirmed the right of Israel to live in security. Indiscriminate attacks against Israeli civilians must stop.

The Committee chair was speaking at the close of the International Meeting on the Question of Palestine, which aimed to raise awareness on the situation of Palestinian political prisoners and at mobilizing the international community to bring this issue to a solution by ensuring the prisoners’ release and reintegration into society.

International law must be respected, Mr. Diallo said in his remarks, adding that the Committee reaffirmed the right of Israel to live in security and attacks against Israeli civilians must cease.

He added that international initiatives at the diplomatic level, together with civil society organizations’ initiatives, would surely lead to improvement of the situation of Palestinian prisoners.

Proposed measures to address the issue of Palestinian political prisoners included the use of existing remedial mechanisms, such as requesting the advisory opinion of the International Court of Justice on the issue of prisoners of war status, and the adoption of a General Assembly resolution on the issue. 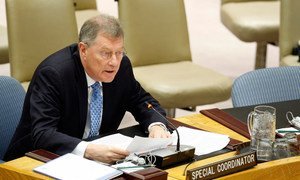 The situation between the Palestinians and Israel remains “uncertain and difficult,” a United Nations envoy told the Security Council today, while warning of the increased risks of an absence of political progress and violence on the ground.