The United Nations envoy for Somalia has voiced outrage at today’s suicide bomb attack in the newly reopened national theatre in the capital, Mogadishu, which reportedly killed at least six people and injured scores of others.

“The reopening of the National Theatre is symbolic of the real change that is happening in Somalia: the city is being rebuilt, culture is being revived and hope is being restored,” said the Secretary-General’s Special Representative for Somalia, Augustine P. Mahiga. “My heart goes out to the families of those killed today and the tragedy they have suffered.”

According to media reports, the blast occurred during a ceremony to mark the first anniversary of the launch of Somalia’s national television station, and was attended by various senior Government officials and representatives of civil society. The head of the country’s Olympic Committee and the chair of the Somali Football Federation were reportedly among those killed.

Speaking from Istanbul, where he was meeting with Turkish officials on upcoming events on Somalia, Mr. Mahiga reiterated his call to members of the insurgent group Al-Shabaab, which claimed responsibility for the bombing, to end violence.

Mr. Mahiga also urged the leaders and people of Somalia to reaffirm their commitment to peace and reconciliation.

“We must not let this tragic event derail the progress that is being made in Somalia,” he said, noting there are significant milestones in the Somali political process on the horizon, including the adoption of a new constitution in May and the transition to a new administration in August.

“Somalia’s future cannot be held hostage to a violent minority who resort to cowardly terrorist acts that target their fellow citizens,” he added.

Until last year, most of Mogadishu was, for several years, riven by a fluid frontline dividing the two sides – fighters belonging to the Al Shabaab movement and troops belonging to the Transitional Federal Government, with the latter supported by the peacekeeping forces of the UN-backed African Union Mission in Somalia (AMISOM). Since the Al Shabaab withdrawal from the capital’s central parts in August, the frontlines were pushed back to the city’s outskirts – but the situation is still far from secure. The use of roadside bombs, grenades and suicide bombers is a regular occurrence, and on the rise. Outbreaks of fighting still take place. 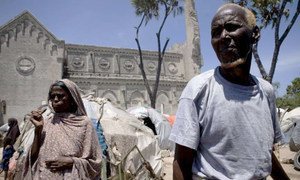 The United Nations refugee agency today called for respect of civilian life and humanitarian agencies in Mogadishu as mortar attacks continued in the Somali capital yesterday, leading to the deaths of three people.